Return of the Visitors, Jay Bennett and The Hobbit

Winter has clenched its icy fingers around Aotearoa this last week or so and I am cold. Brr. 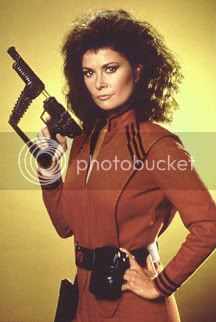 I had kind of vaguely heard they were remaking the old "V" TV series from the 1980s, but hadn't realised it was actually really happening until I saw this trailer for it. "V" was a great '80s nostalgia kick for me -- I remember being horrified out of my wits by the original miniseries and its sequel, despite the cheesy special effects and some rather dire acting. Still, you had Marc "I Am The Beastmaster" Singer, Michael "I Will Kill You My Pinky Finger" Ironside and Jane Badler, who didn't look half bad in a red Nazi-symbolic jumpsuit. And the metaphors, ham-handed as they were, mean the show holds up decently well today. (The ongoing TV series was less good, but I was hooked on it even as it descended into silliness and makeup so cheap that even a 13-year-old noted it.) Anyway, this new series looks fairly promising, certainly better special effects, although I wonder how much "new" it will bring to the table. Will it just repeat the original or will it be a radical re-invention like "Battlestar Galactica"? I quite like Elizabeth Mitchell from "Lost" and am pleased to see her on the cast. Hopefully we'll see it in New Zealand by 2012 or so.

• Rest in peace, Ex-Wilco member Jay Bennett. Bennett contributed a heck of a lot to the distinctive psychedelic quasi-country sound of the band's "Being There" and "Yankee Hotel Foxtrot" albums, and his death at just 45 is pretty shocking. The headstrong Bennett clashed a lot with Wilco leader Jeff Tweedy, as recounted in the excellent documentary "I Am Trying To Break Your Heart," and it sounds like he had a lot of personal issues consuming his life after he left the band in 2001. Wilco has continued to prosper and impress, but I'm sad Bennett never quite broke through as a solo artist.

• Mexican director Guillermo del Toro is going all New Zealand as he gets ready to film 2011's "Hobbit" prequels to "Lord of the Rings." I can't wait for these -- if Peter Jackson couldn't do it, I can imagine no other director than the singularly mysterious del Toro to take his place.
Posted by Nik at 3:30 PM