Stolen from Samurai Frog, an enjoyable meme I thought:

First Job: Cleaning up outside some apartments behind my old house in Grass Valley, Calif. I think I got paid a few bucks by a family friend.

First Real Job: Six weeks at McDonald's, summer 1988, at the end of which I was rather ignominiously fired for failing to turn up to work because a friend had rented a video camera and I thought that was a more entertaining way of spending my time. Hilariously, for some reason the rumour went around that I showed up at work drunk and hung over and vomited all over the place before being thrown out. Mind you, I didn't even touch a drink till college. But that would've been a much cooler way to be dismissed, I guess. 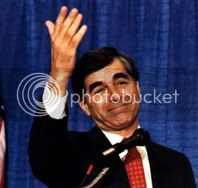 First Favorite Politician: Poor sad doomed hangdog Mike Dukakis, whom I identified with in 1988, the first presidential election I took a real interest in (one year too young to vote though)

First Car: The 1971 Jeep Wagoneer my parents bought in Alaska a few months before I was born. A monstrous green hulk of a machine, the "Avocadomobile" was truly dangerous in the hands of a 17-year-old, proven by the engine throwing a rod and exploding in cataclysmic fashion while I was driving my girlfriend around on a date. 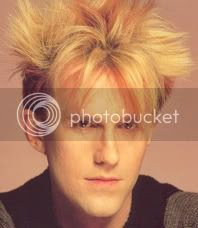 First Encounter with a Famous Person: Burgess Meredith sat in front of us at a play when I was a kid; his child was involved in the production apparently.

First Brush With Death: Choked on peppermint as a wee lad; remember my dad hanging me upside down and whacking on me. Still don't much care for peppermints.

First House/Condo Owned: The house we live in right now -- which we cleverly managed to buy about 6 months before the real estate market crash. Sigh.

First Foreign Country Visited: England, when I was 7.

First Favorite TV Show: "The Brady Bunch." And I sadly admit to this day that I have most episodes committed to memory. A childhood well spent! 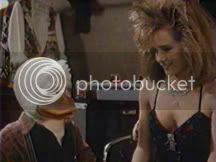 First Favorite Actress: Lea Thompson, circa "Back to the Future" and "Howard The Duck". Yeah, it's more than a little embarrassing I was romantically attracted to anything to do with "Howard The Duck," isn't it?

First Girlfriend/Boyfriend: Cindy and I went roller-skating in 6th grade. It was bliss. That was about as far as things went, too.

First Film Seen: Not sure. I think it had Dick Van Dyke in it.

First Favorite Radio Station: FM 102, Sacramento. I still remember the chirpy tones of their call sign, long after I stopped listening to the radio -- "FM 102!" And the mysteries of Rick Dees' weekly top 40.

First Book I Remember Reading: Good lord, no idea. Kind of like asking "first water I drank." There are too many thousands of words massed up between then and now. Probably something by Charles M Schulz though.

First Meme You Answered on Your Blog: Apparently this one, which has a really wacky table format. I don't even remember doing it!
Posted by Nik at 12:00 AM

Email ThisBlogThis!Share to TwitterShare to FacebookShare to Pinterest
Labels: memes