The Hold Steady -- A Positive Rage 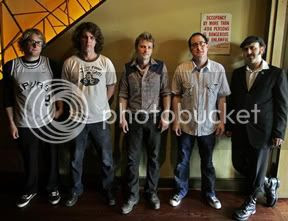 Some folks say authenticity and rock 'n' roll have never quite been firm bedfellows, but in the age of karaoke people still have a hankering for something real -- two chords, a guitar and the truth as the saying goes. Brooklyn's The Hold Steady are firm believers in the power of rock 'n' roll to save your soul, no matter how cliched that might sound -- and they're firm heirs to the tradition. Their new live album A Positive Rage showcases them near their peak.

Over a series of literate and fiery albums, the Hold Steady have carved out a niche somewhere between Springsteen, Hüsker Dü and Elvis Costello. Balding, bespectacled frontman Craig Finn heaps on words in his monologue-slash-rant lyrics, with epic, allusive tales of losers and lovers and ne'er-do-wells spilling out so fast he can barely contain them, backed by a persistent power-chord riff crunch. There's a bar-band foundation to the Hold Steady's tunes about seedy characters with names like Holly and Charlemagne, but it's filtered through a straight-edge punk rock sensibility. There's a knife's edge wit to Finn's lyrics, with biting couplets like this from "Barfruit Blues": "She said 'it's good to see you back in a bar band, baby.' / I said 'it's great to see you're still in the bars.'"

Finn – who admits his barking vocals are "just basically me talking at amplified volume" – is perhaps an unlikely rock star, but that's part of what makes him great. He sings for the underdogs and the dumped on, and perhaps most of all, for the fans. This bar band keeps the audience in focus – one of the lyrics from 2008's superb Stay Positive goes, "we couldn't even have done this if it wasn't for you." The band has a tangible joy for their work that's sometimes hard to find in the clench-jawed alternative rock scene these days. 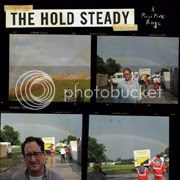 A Positive Rage serves up a heaping helping of Hold Steady righteous rock, their first live CD bundled with an hour-long documentary DVD chronicling their 2006 global tour. The live album captures a Halloween 2007 show in Chicago, and is a high-energy blast, with the band in an engagingly clattering good form, tearing through a set heavy on tunes from their 2006 breakthrough disc Boys and Girls in America. Particular highlights include a barnstorming sing-along take on their skittering hit single "Your Little Hoodrat Friend," and a sweeping 10-minute jam on their show closer "Killer Parties." The documentary DVD gives an endearing glimpse at a bunch of journeymen musicians on the cusp of making it big, playing to growing crowds and taking on their first London shows. There's an interesting subtext that most of the band are in their late 30s yet some of their biggest fans are much younger – perhaps drawn by Finn's honest songs about the confusion and the passion of life. "There's things I think at 35 are funny about being 17 that I didn't think were funny at all when I was 17," he muses at one point. There's truth there.

(*A somewhat longer version of this review first appeared by me over at BlogCritics. Go check 'em out, they've recently designed and are all shiny 'n' stuff.)
Posted by Nik at 12:00 AM