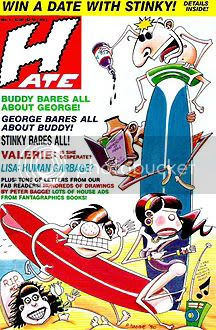 Here we are at the latest in my every-so-often series* taking an alphabetical random jaunt through my comics collection. (OK, every so often means every couple months, really). Anyway, when I think of comics and when I think of "H," I think of one word ---

HATE. ...Not y'know, bashing people and so forth, but rather, Peter Bagge's classic time capsule of 1990s nostalgia featuring ne'er-do-well Buddy Bradley. I've written about "Hate" before on this blog, so this might be a bit repetitive. But go read the previous post to tell you a little of why "Hate" is great.

Now, the first issue of "Hate" I remember picking up was #3, a wonderfully twisted Dante's inferno of a "date night" for Buddy Bradley and his rather aggressive new gal pal Valerie. A simple romantic dinner at home goes haywire as a procession of ever-more-twisted roommates interrupts the night with their various neuroses. It's a simple plot, but Bagge has a keen eye for lunacy; the nerd loner George, the manic id Stinky and the depressed self-pitying Lisa. They're like a roll call of "Hate"-ful behavior, topped off by the rants of Buddy and Valerie. 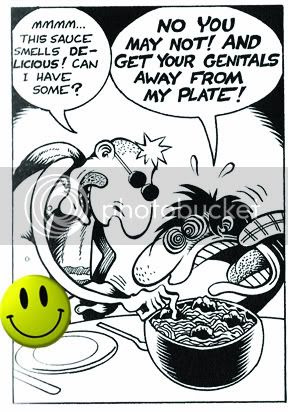 Nobody in "Hate" is really likeable, I guess, but back in the 1990s they all seemed to still be a lot like me and people I knew. Just exaggerated a bit. In fact, this mildly obscured panel here to your right tells you much of what you need to know about "Hate" #3 -- sick and twisted but funny as hell, too. I've been trying to find a use ever since for the phrase "get your genitals away from my plate" but have failed.

A lot of the "grunge" era I guess seems rather dated now; that strange halcyon era of photocopied "zines," plaid shirts and mobile phones that were the size of a briefcase. An era without text messaging or any real internet! "Hate" captures well what it was to be coming of age in that in-between daze, and I hope it's not sacrilege to say I see it to the '90s as R. Crumb's comix are to the early '70s. All that and it be funny, too! While the trappings of the era have changed, one of the sly genius of Bagge's cartooning is that the fundamentals of human interaction haven't. We're all mildly or majorly screwed up, and "Hate" is an ode to the way people sometimes get.