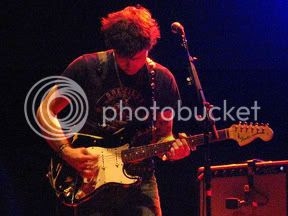 I have to admit, I was a little nervous about seeing Ryan Adams and the Cardinals again. He's either really good or not so good live, known for his temper, coming on the heels of a good-if-not-quite-amazing new album, and oh, he just decided to quit the music biz apparently. The last time I saw him 18 months ago, he was infuriatingly great, doing some wonderful tunes despite apparently trying to sabotage them.

But no worries, because last night's gig was an excellent counterpart to his dark and brooding 2007 show in Auckland. Ryan's mood was fantastic, I'd go so far as to say giddy, with that whole 'last show in a long tour' relief. Compared to the last show when I think he looked up and muttered two sentences to the crowd, tonight he was engagingly goofy, telling jokes, singing impromptu "band themes" for his mates, and even dealing well with a handful of really obnoxious hecklers. I don't know if there really is a Good Ryan/Bad Ryan, but we definitely had Good Ryan last night. 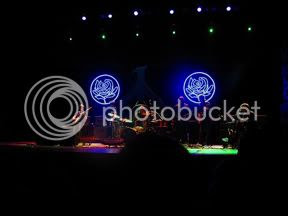 Adams' psychedelic heart-on-his-sleeve country-rock was in fine form, bouncing between ballads and rockers. Highlights for me include beautiful show opener "I See Monsters," a tremendously urgent take on "Rescue Blues," the excellent new tune "Born Into A Light" and a real gem for any Ryan fan -- a soaring, epic take on his superb cover of Oasis' "Wonderwall" (which beats the socks off the original, I have to say). I don't know if this really is their final show downunder for a while or not, but the Cardinals were in excellent form -- particular kudos to lead guitar Neal Gasal and the groovy pedal steel of Jon Graboff.

Auckland's been having a heat wave and it was a bloody sweatlodge inside the Powerstation. The punters were quite into it, which was nice except when the occasional yahoo acted out (great quote from Ryan when gently chastising one arm-waver: "This isn't Fugazi, you know"). Whatever dark place Ryan was in last time, though, it did make a difference to some of his songs -- there was a searing passion then to a song like "Goodnight Rose," which was like an anguished cry from the heart, whereas last night it was a bouncier, less stinging jam. You can't really judge a guy's life from watching him play on stage a couple hours, but I had to wonder about the whole suffering equals art thing. Who writes the best songs, Good Ryan or Bad Ryan? But still, it was great to see him happier yesterday.

And that alleged retirement? Well, the incredibly prolific Ryan deserves a break, to be sure, but I hope he doesn't stay quit forever.

*Photos are from the Wellington gig the night before courtesy of Flickr user aloemonkey.
Posted by Nik at 9:12 AM