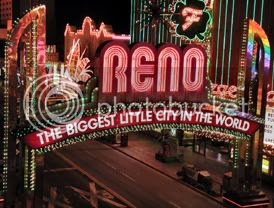 Reno is shaking lately. Quite a lot. Been watching this all from New Zealand a bit worried as we of course used to live just 30 miles from Reno for many years, up at Lake Tahoe, and my parents and many friends still live like only 90 miles or so from Reno in the California foothills. Hope this "earthquake swarm" doesn't indicate something much bigger in the offing.

Reno, Nevada isn't a place you think of earthquakes happening, although I remember when we lived in Tahoe we had a few 5.0 or so shakers – one happened when I was at a video store and knocked about half the videos off the shelf and I immediately worried everyone there thought I somehow did it. Another happened while we were sound asleep in our condo and an enormous WHUMPPPP woke us up. I was sure some idiot had run his truck into our building or something, as that's exactly what it felt like. No matter how often you deal with earthquakes, I don't think you ever quite get used to 'em.

Anyway, I hope Reno's going to be OK. Although it isn't the most elegant town in the world – casinos, sagebrush and strip malls set in the dusty desert edges, with the grand Sierra rising behind it – I've always felt an affinity for the "Biggest Little City In the World." I've never quite wanted to live there, but I often enjoyed visiting when we lived up at the lake. Neon and sprawling, but it's got an all-American spunky charm (much more so than the overblown and absurd Las Vegas, I think).
Posted by Nik at 8:14 AM

Email ThisBlogThis!Share to TwitterShare to FacebookShare to Pinterest
Labels: the US of A