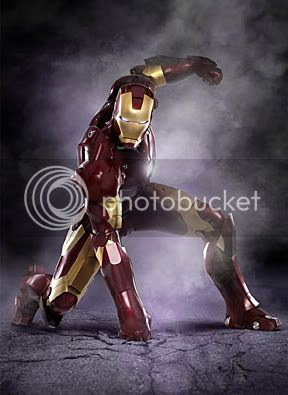 "Iron Man" is here. And abandoning any pretense at being critically impartial, I've got to say – "Iron Man" rocks. It's a near-perfect summer movie confection.

The latest in the never-ending line-up of comic book-films is right up there with the first couple of "X-Men" and "Spider-Man" movies in my mind, a perfectly balanced combination of character, humor, action and whiz-bang special effects. The storyline is your basic origin tale, with a plot that's fairly predictable, but it's the quirks and small tweaks director Jon Favreau and a smart, snappy script add that make "Iron Man" fly.

The lovingly detailed production really makes you believe a man could cobble together a flying suit of armour; the grease, nuts and bolts show. Iron Man is a character I've long liked - some of the first comics I remember reading back in the '80s were from the great Micheline/Layton run - but he's been served poorly in comics in recent years. I don't even recognize the guy they have being Iron Man these days. Which is why "Iron Man" the movie is such ripping fun - it takes you back to the core essence of the character, a spoiled hyperactive genius playboy who becomes a hero, but who's basically still a boy with the biggest toys in the room. The storyline has been slightly rejiggered to examine the post-9/11 murky reality of the world, but not in an obtrusive fashion.

Robert Downey Jr. is perhaps the best superhero casting choice since Christopher Reeve. I love how he's matured from the wise-ass young punk into a battered, riveting leading man, and he simply IS inventor and gazillionaire Tony Stark. The tremendous presence he's shown in recent flicks like "Zodiac" and "Kiss Kiss, Bang Bang" is here in spades, but honed into action-movie coolness. While the hard-living, flawed Tony Stark takes the piss out of traditional square-jawed superhero notions, Downey also wisely manages to keep his turn from being strictly comedy. He balances action and humor very well. 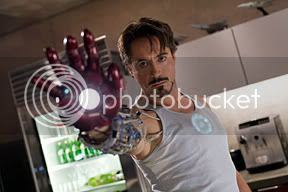 I don't want to spoil Downey's wonderful final line in the picture, given at a press conference, but to me it just sums up his wiseacre charm and the movie's entirely beguiling fanboy whimsy. While it's got darker moments, Downey's Stark is simply a less tormented figure than the Batman, Hulk, Spider-Man and Wolverine – and even Superman – than we've seen in the past couple of years. He digs being Iron Man. (As Downey says with a kind of stunned amazement, "Yeah, I can fly.") He combines the do-it-yourself heroism of Batman with a James Bond-like love of gadgetry.

Downey without a doubt makes "Iron Man" work, but he's backed up by a swell cast. Terrence Howard's role as sidekick James Rhodes is underwritten, but Howard brings a wry strut to it, while Gwyneth Paltrow's spunky Pepper Potts takes a fairly forgettable female sidekick role and makes it subtle, and sexy. Best of all is Jeff Bridges as villain Obadiah Stane, hamming it up tremendously. I usually associate Bridges with benevolent authority figure roles or gently befuddled goofballs, ala "The Contender" or "The Big Lebowski." But here, he channels his genial presence into genuine menace, with a shaved head that evokes Lex Luthor and a purr that quickly becomes a growl. Sure, I found his character's transformation a little drastic, but heck - it is a comic book movie after all. 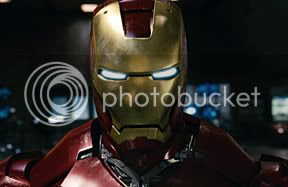 Do I have a quibble or two? Well, sure, it's a little light on the action maybe, but then again so was "Spider-Man" frankly and I loved that too. Character is never abandoned for special effects. The story is Tony Stark's, rather than Iron Man's. The final battle sequence is a wee bit rushed compared to the leisurely build-up, but hey, it works for me. I have to admit that when Tony Stark dons the familiar "Mark 3" gold-and-red armor and starts flying about, I felt a rush of honest adrenaline and fanboy glee at seeing the comic become reality. Toss in all the nifty little "Easter eggs" for Marvel Comics fans like myself and you've got a comic book movie that's solid as Iron Man's armor. Check it out.
Posted by Nik at 4:53 PM