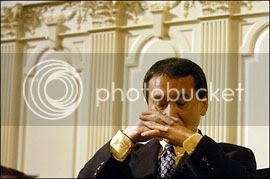 Haruki Murakami is one of Japan's finest authors, and for my money, one of the best writers wielding a pen these days. His works, global in voice but with a uniquely Japanese perspective, are filled with layers that disappear into subterranean mists. Murakami's work is that of a modern man's probing of where Japan today fits into its bloody, mythology-filled history. Underneath everyday doings like feeding your cat and playing a jazz record lie the potential for strange abysses indeed. Murakami's work isn't science fiction, precisely, but it carries a healthy element of the outer limits coloring the edge of everything.

Murakami's most recent American-published work, now out in paperback, is the short novel After Dark, which steps back from the longer epic approach of his other books like the magnificent The Wind-Up Bird Chronicle and Kafka At The Shore.

After Dark is a series of vignettes set over one long Tokyo night for 19-year-old Mari, a student who can't sleep and is passing time at a coffee shop. She meets a goofily endearing young musician, a burly "love motel" manager, a battered prostitute and more as she passes a most strange, sleepless night. Meanwhile, Mari's gorgeous estranged sister Eri is in a strange coma-like state, her fate somehow connected to Mari's wanderings.

Murakami casts a beguiling rhythm of endless nights, evenings not spent getting loaded and throwing up in an alley somewhere, but rather, a more lonely, mysterious darkness – the people who sit in coffee shops alone at 2 a.m. reading a book, the guy shuffling home from work just as dawn is rising. After Dark is populated with the characters of the sleeping world: "Time moves in its own special way in the middle of the night," one character notes sagely. The enigmatic After Dark is almost more of a tone poem than a fully fleshed-out novel, a kind of throat-clearing between bigger tales. Set in "real time" – each chapter ticks by with a clock telling us the hour of the evening – it has a brisk feeling.

Where the novel threatens to derail is in its plot, which meanders enticingly yet never quite gels. Like much of Murakami's work, resolution remains just out of reach – but while that quality works in some of his other books, making the reader feel involved in an open interpretation of events, here it's all just a little too opaque.

The finest parts of After Dark are the teasing, thoughtful dialogue Mari has with the various misfits and strangers she meets during the night. Murakami expertly portrays a thoughtful young girl trying to figure out her place in the world. But in its more overarching symbolic threads, After Dark feels rushed and less haunting than is typical for Murakami.

I wouldn't quite recommend After Dark for someone new to Murakami (try Norwegian Wood's bittersweet romance, perhaps). Yet while it's less satisfying than it might be, it's still got a sheen of mysterious beauty to it that carries through all his work. It's a minor piece, perhaps, but still part of a career tapestry full of often astounding imagery and strangeness.
Posted by Nik at 9:09 PM