This week's event for the cool crowd is the Auckland Writers and Readers Festival, the big NZ book festival which as well as local authors gets some pretty great overseas talent including Richard Ford, J.M. Coetzee, Amy Tan, and many more. I managed to make time to check out one of this year's speakers and a favorite writer, Junot Diaz, who spoke in an hour Q&A Friday night. 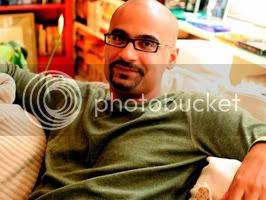 Junot Diaz's debut short story collection "Drown" came out in the mid-1990s and wowed the literary crowd. I remember reading it circa 1997 and being blown away. It was a fusion-charged, electric mix of tales of immigrants in New Jersey and their native Dominican Republic. It was a book that stuck in your head, but Diaz was silent long after the buzz passed. More than a decade later, Diaz followed it up with last year's "The Brief Wondrous Life of Oscar Wao," a novel which combines the true tale of the Dominican dictator Trujillo with the tale of an outcast D&D playing, comics-reading über-nerd and his strange destiny. It snapped up the National Book Critics Circles Award and the Pulitzer Prize -- so much for sophomore book slump. One critic called it "an immigrant-family saga for people who don't read immigrant-family sagas."

In Auckland, Diaz seemed uncomfortable to be up on stage being questioned, but warmed up after a while into a pleasingly rambling, grumpy presence, who gave us lots to chew on on the nature of storytelling. He talked about the writer's life (and the sobering sales figures even a Pulitzer Prize winner deals with in the illiterate world today), and even, prompted by an audience question, went off on a tangent comparing Alan Moore's Watchmen's Dr. Manhattan to the effects of Caribbean dictatorship. When was the last time you heard a Pulitzer Prize winner pimping "Watchmen" to an audience? Very cool. 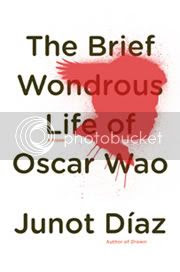 If you haven't read any of Diaz's work, go give "Oscar Wao"' a read. Imagine Gabriel Garcia Marquez run through a Quentin Tarantino filter, perhaps. His snappy Spanglish lingo and pop-culture dropping slang make it breezy, while the greater subtext about Dominican society and the nature of dictatorships gives it heft for re-reads. Like Jonathan Lethem or Michael Chabon, Diaz has the knack of channeling a diet of '70s pop culture ephrema and using it as a toolbox to craft compelling deep fiction – a generation that grew up on Jack Kirby as well as "real" books.

Oh, and his next book? It may take 10 years, but Diaz let slip that it might just be about... "Killer robots who happen to be Dominican." I am so there.
Posted by Nik at 8:55 AM