Why I feel like Tom Hanks in 'The Money Pit'

So we were feeling so very good about the house we bought six months ago. All the first-time homeowner jitters, but so far, it had been smooth sailing and everything's groovy. Until last weekend, when we discovered our entire bathroom floor is rotting out beneath us due to a very slow leak inside the wall behind the shower. This is what it looks like under the house: 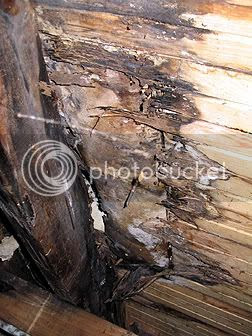 Argh, argh I say. I won't get too much into it here, but basically, we had a home inspection done and this got missed, mostly due to our own stupidity. The leak is totally undetectable from inside the house and you have to crawl under the house for 30 feet or so to see the damage. Our inspector couldn't get under the crawlspace because of all the junk left there by previous owners and we waved it off. We made the fatal mistake: We assumed it was OK. Now, we get to renovate our entire bathroom!

We made a classic first home-buyer error, it seems. The leak has been going on for YEARS apparently unbeknownst to anyone as the rot is extensive, taking out much of the floor and joists underneath. I was actually stunned speechless when I discovered the damage.

Anyway, we're moving past the kicking ourselves in the head business and on to fixing it. After a plumber replaces the entire shower plumbing arrangement tomorrow, my father-in-law and I will pull up the tub and replace much of the floor, which will occupy much of my free time in the next week or two. I've been looking for an excuse to flex my non-existent handyman skills, anyway, so here we go. Without Granddad's very much appreciated help we would be far more up a creek than we are, as hopefully we can avoid using expensive contractors and the like to fix this mess. Either way, though, it's gonna take a bite. That's what you get for thinking you got a fine deal, I guess.