A quick zip around volcanic fields 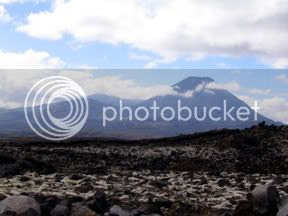 It was getting to feel weird that we've been living in New Zealand now over a year-and-a-half, but we'd barely been out of the Auckland vicinity. Work, buying house, et cetera... we did a lot of touring on previous trips, of course, but heck, there's still lots to see. So when we finally had some joint vacation time last week, it was off exploring areas of New Zealand I've never seen before, down in southwestern corner of North Island in the Taranaki and Wanganui areas, and visiting the fearsome Mount Ruapehu.

There are really two New Zealands, as most kiwis will tell you – Auckland and everywhere else. There's a lovely rural beauty to the Waikato region just south of Auckland stretching along the spine of the North island. It's full of farms, sheep and cows, endless agriculture and green hills. Lovely stuff, mind you, but a lot of New Zealand looks like that, and we wanted new – the Taranaki area is quite grand, a peninsula jutting out of southwestern North Island with the pointy majesty of dormant volcano Mount Egmont (or Taranaki, as it's usually called these days) plopped right in the middle. We spent several leisurely days camping our way around this peninsula (which is quite tiny by American geography standards -- only a couple hours to go round the whole thing, really). Desolate beauty, the often cloud-shrouded mountain looming in the distance, the rough waters of the sea bashing around all the surfers who love this area (I kept having "Point Break" flashbacks, myself). 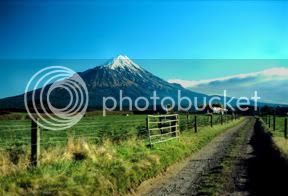 Unfortunately our digital camera decided to temporarily spaz out and I have no pics to show of the Taranaki area, so I picked a nice wintry shot I found online to represent, at right. You're able to drive right up towards the lower/middle of the mountain, and we stopped at the grand Dawson Falls area where on a viewing platform I was able to see farmland going flat and the sea in one direction, the towering ruggedness of Taranaki on the other. Not too many mountains where you can see the sea, too.

We explored the nice small towns in the area (including Wanganui, which has the single coolest, biggest kids' playground I've ever seen) before working our way back North again on the final day, and stopping at Tongariro National Park for more volcano action. This cluster of volcanoes in the middle of North Island is anything but stagnant – the biggest, Ruapehu, just exploded a bit in September. You can also drive right up to the bottom of Ruapehu, which is a popular ski area. It's very "Lord of the Rings" territory, and lots of the Mordor/Mount Doom action was shot in the area. The ski area, dry of snow right now, fascinated me as it was sharp, nasty-looking piles of lava rock everywhere. Wouldn't much like to fall on that even with snow covering it. 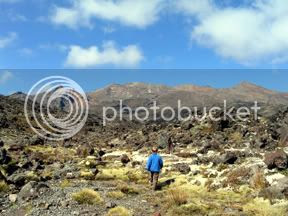 We also had grand luck with both mounts Taranaki and Ruapehu, where you're as likely to see nothing but cloud as anything. The skies parted nicely for both of them, and we had some gorgeous views up on Ruapehu, particularly. I would love to climb right up and hike around Ruapehu sometime when there's no 4-year-olds around. (But watch out the volcano doesn't blow up on you).

It's a nice reminder that New Zealand mostly isn't the traffic and typical urban annoyances you sometimes get sick of in Auckland. Now we just have to wait for our next vacation!
Posted by Nik at 4:25 PM