In tribute: The manly art of Charlton Heston

...So did I mention I was going on a week's vacation? 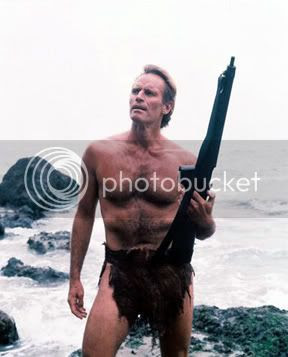 More on that soon (we had a nifty camping trip down into the southwesterly reaches of North Island), but I had to break my blog-silence for a minute to offer an appreciation for the late Charlton Heston, that manly man's actor -- a brute force who I disagreed with in almost every fashion politically, but whom I still grew up admiring as the clench-jawed hero of "Planet of the Apes," "Soylent Green," "Omega Man" and more. Heston was stone-cold awesome to me at the tender age of 12 or 13, when I first caught the "Planet of the Apes" series in an afternoon movie marathon. ("Beneath the Planet of the Apes," although nearly Heston-free, scared the bejeezus out of me and was the most nihilistic "G"-rated movie I've ever seen -- Dr. K will educate you further.) His earlier work wasn't quite as interesting to me (I've still never seen "Ben Hur"), but Charlton Heston - Mexican detective! in Orson Welles' grand 1958 "Touch of Evil" remains one of my favorite Heston roles.

But it was the first "Planet of the Apes" where we had maximum Heston, bare-chested, growling ("get your hands off me you damn dirty ape!") and at sky-high testosterone levels. I'd easily plop that first "Apes" movie in my all-time top 10 -- it's inventive, satirical and strangely resonant 40 years on. Scared the heck of out of me as a whippersnapper, and still gets to me (the 2001 remake, despite some awesome makeup, is a pale shadow of the original). Heston's cynical, often cruelly arrogant Taylor, is mankind's representative in the world of the Apes - rude and tough, but also human to the core. We identified with him, as he navigated a strange and awful world that -- it turns out -- mankind made in its own war and hatred. Heston's presence somehow made a movie that might've been a silly joke into something that rang real.

Anyway. Heston starred in a blue ton of movies as well as "Apes," and brought a steel-eyed, brutish charisma to many of them. What folks don't recall now is that he was a big supporter of the Rev. Martin Luther King, and of civil rights, at a time when it was impolitic to be so. Later, he became the right-wing president of the National Rifle Association, and that's when many of us Heston fans dropped out -- sorry Chuck, guns never did much for me. 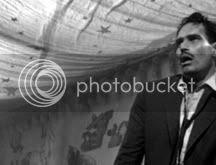 But I felt a pang of sorrow when he was diagnosed with Alzheimer's several years back -- sorry, whatever your politics, nobody deserves that -- and when they announced his death tonight, I realized that the invincible alpha-male hero at the center of so many of my primeval teen movie experiences was gone, even though Heston seemed as eternal as the tides, as ever-lasting as the stone the Statue of Liberty itself was made of. Godspeed, Chuck. We didn't agree often, but heck, you haunted my dreams as an actor, and that's the ultimate accolade for any of your creed.