R.E.M. "Accelerate": Call it a comeback 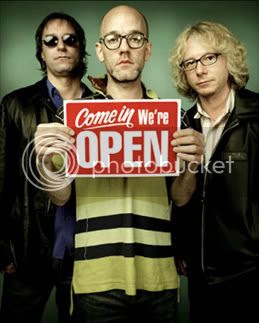 Once upon a time, 15 years ago or so, R.E.M. was like the Beatles to me. I was one of the "late" fans who discovered them circa 1989's "Green" rather than their earliest work, but that slam-bang series of discs in the late '80s-early '90s won me over. R.E.M. were mysterious, a first hint of the world of "underground" rock to me when I was mired in Billy Joel and Genesis fandom (it's a time I try to block out of my rock memoirs). "Orange Crush" tantalized me – what was this song about, I wondered as I listened to Michael Stipe holler/mumble his way through the lyrics. "Out Of Time" was that rarity, a huge hit album that was actually superb (if you ignore the rap song), and "Automatic For The People" simply is the soundtrack to my early years in college – I remember listening to the CD in the dark with friends in my first apartment, caught up in the forlorn drift of "Drive" and "Nightswimming." They were trying to tell us something, if only we could figure out what it was.

But unlike their 1990s alt-rock superstar contemporaries U2, R.E.M. seemed to go off the rails in the last decade, after drummer Bill Berry left in 1998. The albums post-"Automatic" drizzled away fans, although I still think the barbed-wire angst of "Monster" and the ecclectic fumes of "New Adventures In Hi-Fi" are fantastic work. But 1998's "Up" was a droning bore, while "Reveal" was half great, half-awful (I absolutely love "All The Way To Reno," though), and 2004's rock-bottom "Around The Sun" is the first R.E.M. album I listened to twice and re-sold for credit. It started to feel like the band should've, as Stipe once joked in an interview, broken up at the stroke of midnight on Dec. 31, 1999. There was a sense of sputtering out, and I kind of forgot about the band they way you do when someone you like disappoints you once too often.

All of which brings us to their latest disc, "Accelerate." As the reviews generally have been saying, it's a real comeback – for the first time in a decade, Michael Stipe sounds excited to be here, Peter Buck's guitar is a soaring delight, and you can even hear Mike Mills doing harmonies just like the old days. The plodding crooning of the last few discs is gone, and Stipe brings back the bellowing revivalist-preacher power of some of his "Document"-era work. It kicks off with a superb one-two punch in "Living Well Is The Best Revenge" and "Man-Sized Wreath," two guitar-drenched full-force raves that have the propulsive momentum that too much recent R.E.M. has lacked. Melody is there, but this is also the loudest R.E.M. record since "Monster," and Buck's guitar is fantastic -- that patented R.E.M. jangle is back, man! "Supernatural Superserious" is a fine sing-along crowd pleaser, while title song "Accelerate" carries the disc's metaphor of momentum to a hard-driving, head-banging extreme. It's got that yearning passion that the best of R.E.M. offers.

Much of this record has echoes of the past, but it never quite devolves into an exercise in nostalgia (even if the song "Sing For the Submarine" actually quotes a line from their '80s number "Feeling Gravity's Pull"). It echoes their prevoius work, but heck, the band's been around almost 30 (urk) years – they're allowed to look back a bit. The campy album closer "I'm Gonna DJ" seems like a direct rebuttal to the band's critics: "I don't want to go until I'm good and ready." Stick around, guys, I remember you now.
Posted by Nik at 8:05 AM