MOVIES: 'The Man Who Fell To Earth' 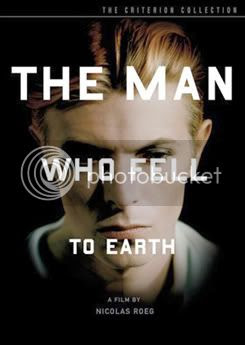 As regular readers know, I'm cuckoo for David Bowie. Yet perhaps his best-known movie, 1976's "The Man Who Fell To Earth," was always a kind of enigma to me. It took me until maybe the third or fourth time watching this strange, hypnotic curio to really start appreciating it. I picked up the fantastic new Criterion Collection 2-DVD set of it recently and watched it with the commentary featuring Bowie, director Nick Roeg and co-star Buck Henry. As with the best commentaries, I was left with a whole new appreciation for what they were trying to do here.

If you've never seen it, "The Man Who Fell To Earth" is a trippy quasi-science fiction film. It came out shortly before "Star Wars," but it's almost completely the opposite kind of movie. In a nutshell, Bowie is Thomas Newton, an alien from a dying world who comes to Earth to find a way to save his family. But although he quickly becomes a millionaire selling alien technology patents, Newton soon loses his grip with the temptations of humanity's sins. Drugs, women and violence begin to corrupt this gentle soul. Ultimately, he ends up losing his freedom when his true identity is discovered.

"The Man Who Fell To Earth" isn't an easy movie to watch – it's a strange impressionistic non-narrative, hallucinatory and yet vividly real. Newton can be seen as an angel losing his innocence, a fool getting his just deserts or an artist corrupted by reality. Roeg makes his story elliptical, hard to follow at points. It's far less about narrative than it is about sensation, the eerie loneliness in the core of life. Certain scenes seem more added for shock value than adding anything to the story. Yet the whole is a haunting vision. Roeg avoids sci-fi clichés – there's a few surreal glimpses at Newton's homeworld and life there, but Roeg more determined to show us how alien Earth really is through Newton's eyes. He makes us feel like Newton, alone and overwhelmed by strangeness.

Bowie has dabbled in acting on and off over the years, but "The Man Who Fell To Earth" remains his one true masterpiece. Bowie's basically playing a twisted mirror vision of himself – he was whacked out on coke at the time, dazzled by superstardom and nearing the collapse that would lead to the brilliance of his "Berlin" period. Yet he's never been more beautiful than he is here, fragile and utterly charismatic as Newton moves from ingenue to bitter outcast. In supporting roles as Newton's "temptations," Candy Clark is terrific as a woman who moves from hotel maid to Bowie's companion, ending up shattered by him. Rip Torn grounds the movie in reality as an acerbic, cynical professor who ends up sucked into Newton's world – and ultimately betraying him.

One thing that's off-putting when you first view Roeg's film is his handling of the passage of time. Roeg jumps abruptly back and forth in the narrative, and years can pass in a single transition. Bowie's Newton is ageless, immortal, but as the film passes you start to see other characters age. Roeg views time as a fluid ocean, and his approach colors how we see the film. Like much 1970s film, it's also far more open about sexuality than today's movies – Roeg contrasts how we view sex and how Newton sees it to a truly disorienting effect. The movie and its fashions are quite dated, of course, but I still find it timeless in the same way that say, Woody Allen's "Annie Hall" is – bell-bottoms aside, it remains a true snapshot of the human condition.

This Criterion DVD set is their typically comprehensive work – besides the beautifully remastered version of the film itself (the colors "pop" and the elegant, alienating cinematography sparkles), you've got special features galore - interviews with most of the principals, writers and more. In a nice bonus, there's also a copy of Walter Tevis' original 1963 novel. (Which I haven't had a chance to read yet – oddly, though, the late Tevis also wrote the book that the movie "The Hustler" is based on. Pool and aliens. Cool.)

"The Man Who Fell To Earth" is one of those rare movies I can return to every few years and get something totally different out of it each time. In that way, even though it's 30 years old, it remains ahead of its time.
Posted by Nik at 3:20 AM