OK, first the review, but then read below for the DVD giveaway contest… 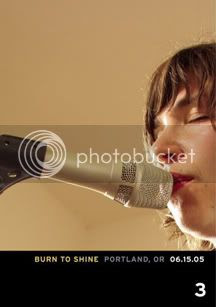 Have a bunch of bands come on over and hang out. Film them blasting out a handful of songs in your living room. And at the end of the day, burn the house down. It's a recipe for music and a bit of mayhem, and it's the foundation of the invigorating Burn To Shine DVD series headed up by Fugazi drummer and producer Brendan Canty and director Christoph Green. After two previous installments set in Washington, D.C., and Chicago, the third in the series, "Portland, OR 06.15.05," is just about to be released and takes the action to the great Northwest. It's a beautifully filmed, tuneful snapshot of a vibrant city's musical scene.

The Burn to Shine ground rules: The producers pick a house that's about to be torn down. A variety of bands are chosen and over the course of one day, they're all filmed playing one song each in the house. At the end of the day, we see the house destroyed. For the Portland edition filmed last June, a home in the fancy suburbs of Tualatin was picked. The elderly resident had died and the nice little home is about to be demolished to make room for a sprawling Italian villa. Musicians play in the house overlooking a golf course and green hills. It's a cunning juxtaposition, and the intimate setting in the house makes for some great performances.

The "marquee names" here include Portland star musicians like The Shins, Sleater-Kinney, and The Decemberists. The Decemberists' Chris Fink was chosen as the "curator" of this installment and helped pick the 11 bands. It's a nice mix of Portland music: the thrash-punk of The Thermals sits side-by-side with the old-world accordion and violin-laced folk of Mirah and the very modern hip-hop of Lifesavas. Not every performance is stunning — some feel muffled by the small space -– but some are fantastic, particularly The Decembrists' epic antiquarian storytelling in "The Mariners' Revenge Song," the sunny pop of The Shins in "Saint Simon," and the sweet ode of Quasi's "Peace and Love." You've even got the exceedingly cute yet surprisingly tuneful sounds of a pre-teenage act, The Ready.

One could always quibble with the band selection, but it's a pretty diverse group of musicians. I wouldn't have minded seeing Everclear, Pink Martini, or Modest Mouse, all also great bands with Portland ties. Still, there's a nice handpicked feeling to the lineup here, and it's all framed by the outstanding cinematography of Nikos Kourkoulakos, who's got a poet's eye for showing the mechanics of music. He avoids rock video clichés and uses his tight, small stage in fascinating, elegant ways. "What we're trying to get away from is the idea that music always has to be presented on giant stages…" Canty told The Chicago Reader. It's a pretty cool project, one that runs the risk of being art-school pretentious, but instead is subtle and gives you a new perspective on the musicians.

At the end of "Burn To Shine 3," the humble home that's been our stage is burned down by the Tualatin Fire Department in a practice exercise. The bands go home, the music's over. But they leave behind a clever and fun time capsule of the diversity of Portland music circa 2005.

And about that contest? Well for some reason I got sent two copies of this DVD to review, so I will give one shiny new copy of the swell "Burn To Shine 3" away – that is, to the Spatula Forumer (Forumite? Forumulator?) who can come up with the Worst Band Name Ever. You can't come up with any that are on this list – they ought to be entirely your own invention or at least one I haven't heard of.

Slap me silly with a Worst Band Name either below in the comments or shoot me an e-mail at nikdirga at hotmail dot com by, let's say, Tuesday. My crack team of judges will look 'em over and pick the best one sometime next week!
Posted by Nik at 2:38 AM