ETC.: I am in your extended network

Everything must go! We're giving away and selling possessions at a record pace – the few things we held on to post-yard sale are being lined up and sold to the highest bidder. We're holding on to the bed, TV, etc. till closer to our departure Labor Day weekend, but trying to arrange willing buyers for them now. So far so good, except for the bed we paid $700 for a few years back that we're trying to get a somewhat decent price for. And good friend Christian and his kind wife Mary agreed to take our poor old Kudzu cat a while back, hurray. Everything is starting to fall into place. If we can just avoid more crises then we will survive it. (The MacBook is flying out to Apple to be repaired Monday, it looks like. At least the battery hasn't exploded.) (Edit: And the bed sold this morning. Hoo-ha!) 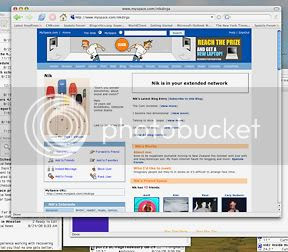 ITEM! In between it all, I find MySpace is a funny place. I've been dabbling over there for a month or so now, having finally been sucked into it by some friends online. I've rediscovered some old friends I haven't heard from in years, which is nice, and I particularly like all the bands you can link up to and hear tracks from on there. I do feel vaguely like an old fogey meddling in a land of teenagers, but I'm not really taking it all that seriously.

One thing that's funny on there is all the fakers – people who claim to be famous people but really aren't. It's kind of hard to tell who's "real" on there anyway – I got suckered by an apparent Bruce Campbell faker who got booted from the site. Damn you, Fake Bruce! Also amusing is the way some people think the "real" Bob Dylan actually added them to his page, rather than say, one of his PR flaks or a record company rep. I don't think Bob Dylan's actually reading your MySpace page and deeming you worthy of being his bestest "Friend," jimsparklehorse312. But I guess that illusion of bonding is part of what makes MySpace so damned successful, ain't it?

(Besides, there's the voyeuristic fun of watching people make idiots of themselves in stuff like the MySpace Stupid Haircut awards. Puts my thinning hair woes in perspective.)

ITEM! Hey, hats off to Lacey, who in my unstoppable wisdom I decided won my Worst Band Name contest. There's something about I Got Mono that just speaks to me as a wretched band name. She wins that shiny new Burn To Shine 3 DVD and it's not at all because she works with me. Well, for a few more days, anyway.
Posted by Nik at 2:32 AM

Email ThisBlogThis!Share to TwitterShare to FacebookShare to Pinterest
Labels: immigration