LIFE: Ode to a county fair 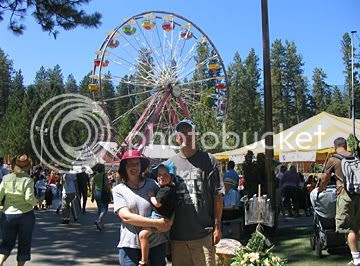 Man, I do love a county fair. I got my fill last week, with two county fairs in four days' time – went to the Douglas County Fair up here Wednesday for the big Alice Cooper hoo-ha, and then Saturday down in California the whole family went to the Nevada County Fair in my old hometown.

There's something about a fair that oozes Americana for me. I could go to one once a month easily. The food, the animals, the exhibits, the kitschy booths and rides, the scent of corn dogs and sawdust and cattle in the hot sun – ahh, that's small-town life!

The Nevada County Fair will always be my favorite, since it's the one I grew up with and have gone to on and off for 30 years or so now. It's also got less ugly tattoos and mullets than the one up here (although we have better music). Two days of fair food in a week was enough to break all dietary restrictions and ensure I spend this week eating nothing but bread and water. Ohhhhh, but it was so worth it.

It's weird to come back to the Nevada County Fair every couple years now, as it's always strange to find yourself in places you have vivid memories of being a squirrelly kid and teenager are. I even went to preschool at a building on the fairgrounds. I remember running around the fair as a kid, blowing money on the rides, and I remember the complicated social web involved in going to the fair as a teen (god forbid you're seen with your parents then!). The Nevada County Fair hasn't changed a bit in the past 20 years it feels like to me, and I love that. Huddled among the huge pine trees, meandering through the red dust and winding pathways, it feels like a living time capsule. 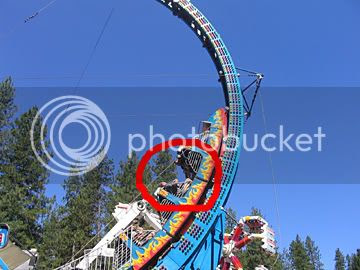 In a fit of utter insanity, my brother even talked me into going on the Fire Ball ride, in which you defy all laws of sanity and physics and are spun upside-down at spleen-rupturing speeds in a big loop. I hadn't been on one of these kinds of rides in years, and let me now say for the record, I'm too old for that stuff. I spent the entire ride in a frozen-muscled rictus of fear as my brother laughed at me. As the ride paused for a second with yours truly hung upside-down 80 feet in the air, and I felt the press of my 190 pounds against the top of the seat restraints, I flashed back on all the headlines I've ever read about gruesome carnival ride failures. And that was all the ride action I needed this year. 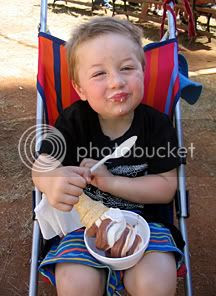 Peter had a swell time too – the last time we took him to the NC Fair he was barely 6 months old, and now he could run around for hours. We tried to put him on a kiddie car ride but it ended with a bit of screaming and him having to be pulled off the ride. He loves cars, but not when they move, apparently. He was then traumatized by an assertive goat at a petting zoo, so the only cure was ice cream – which then considerably brightened the rest of his fair day and he had a lot of fun.

As we enter our final two months in America, I've become weirdly pre-nostalgic for all those red, white and blue clichés – the county fair, the open highways, Fourth of July, cowboy hats and Wal-Marts. There are things I won't miss, but I do hope I can find a nice little county fair in New Zealand every once in a while. And maybe a corn dog or two.
Posted by Nik at 4:09 AM

Email ThisBlogThis!Share to TwitterShare to FacebookShare to Pinterest
Labels: life, the US of A