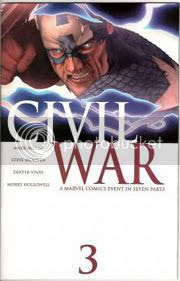 Writer Mark Millar is a master at bombast, action and cool one-liners. It's the subtle heart that sometimes seems to be missing from his work. "Civil War" is one of his best efforts yet, but this mega-Marvel crossover series, nearly halfway through, still lacks a certain something. It's a political hot topic incarnate – after a disaster kills hundreds, the government cracks down on superheroes, forcing them to register and work for the government. The heroes split into two sides – pro and anti-registration. The pro side is led by Iron Man and his new buddy Spider-Man, while the anti-government side, strangely enough, is led by Captain America, the nation's symbol. Everyone is forced to choose sides.

It's a cool hook, and so far, the series has been fast-paced, epic fun, with some gorgeous, fluid art by Steve McNiven. There's a kick, too, in seeing longtime comrades like Captain America and Iron Man battling it out. And I've already written about how I'm rather fond of the idea of Spider-Man publicly unmasking and the story possibilities it offers. The parallels to the U.S.'s post-9/11 policies are also strong – and therein lies some of the problems for me. Millar won't use a feather when a sledgehammer will do, and while it's undeniably entertaining, "Civil War" is utterly lacking in subtlety. He paints with a broad, broad brush – Iron Man's pro-government side is basically shown as the bad guys, and it's hard to swallow this is the same heroic Iron Man who's been flying around in comics for 40+ years.

Miller's authorial voice is overpowering. Overnight, in "Civil War" the Marvel Universe becomes this Orwellian police state, and I'm just not quite buying it. Millar hasn't made the change feel organic – the plot feels forced, and doesn't flow out of natural character actions no matter how you squeeze it. I'm halfway expecting the old "Iron Man controlled by aliens" or some deus ex machina at the end of the seven-issue series – which is a disappointment. "Civil War" is fun to read, and a hell of a lot better than recent crossovers like "House of M" and "Infinite Crisis," but kind of empty in the head no matter how profound it tries to be. It remains to be seen if it'll pick up in the second half. Grade: B
Posted by Nik at 5:24 AM