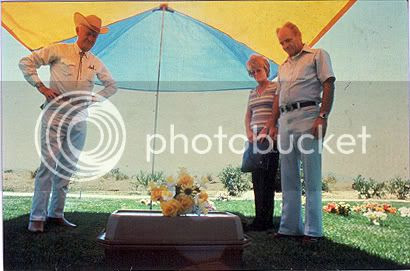 “There’s your dog; your dog’s dead. But where’s the thing that made it move? It had to be something, didn’t it?”
- from Gates of Heaven

I finally got to see a movie I've been curious about for years, Errol Morris' 1978 documentary "Gates of Heaven." It belatedly showed up on DVD recently, after being impossible to find on video for years. It's the very first movie by Errol Morris, who won an Oscar for his "The Fog of War" last year. This cult-ish film is about two pet cemeteries - one that's closed, one that's new, the people who run them and the people who use them, and what it all means about life, dying and dogs and cats. Deadpan funny, heartfelt and low-key, it's a unique and interesting flick.

The reason I was so curious about it was pretty much exclusively because one of my favorite critics, Roger Ebert, is a huge fan. He lists the movie as one of his "Top 10" of all time - yet it's one few people have even heard of. In his excellent book, "The Great Movies," he features an entire essay on "Gates of Heaven," and it's far more eloquent than anything I'd have to say on the movie, so go read it here.

Back? OK. Anyway, watching "Gates" was an interesting experience. Few movies we're told are great live up to our impossible expectations in advance. "Gates" is, like most of Errol Morris' movies I've seen, stark and unadorned. Unlike, say, Michael Moore, Errol Morris is the invisible documentarian, not interested in being the star. "Gates" features no narration, no questioning at all from Morris - it's entirely his subjects talking, pure observation, in frank, unstaged language about their lives. It makes for compelling viewing, often, although sometimes it becomes the equivalent of being stuck in an elevator with a boor, and other times it's a little confusing not having the ubiquitous narrator telling you what's happening onscreen.

"Gates" moves slow for those used to zip-bang-boom modern storytelling, but there's a timeless, Faulkner-esque rhythm to his work. Certainly, the first half-hour you wonder, are we just going to get people talking directly at the screen the entire time? Yet it's hypnotic in a way - the bragging, insensitive rendering plant owner, the strange, rambling monologue from the elderly woman in the middle of the film, the very different worldviews of the two sons of a pet cemetery owner, one a wistful hippie, the other a deluded "motivational thinker." There's a sad vibe, but it also feels vaguely silly, as passion often does in the light of day. A montage of grim pet tombstones is all bundled up emotions at once. For a movie ostensibly about pets, they're barely in it - except for one bizarre scene featuring a "singing dog."

Morris' point isn't just about pets - it's about things we leave behind, the unknowable voids before and after our lifetimes, and how we find happiness while we're here. It's the kind of movie you could return to every few years and find a new meaning in. It's easy to see why Ebert was so high on it - it's not for everyone, but "Gates of Heaven" is a film that is worth viewing at least once.
Posted by Nik at 7:01 PM