COMICS: How do you keep it sane?

Warning: this is an über-geek post. 'Normal' folk beware. Ah, lazy Sunday, and finally had a chance to clean up the piles and stacks o' comics in our office-slash-Nik's comic book library, and toss a bunch of stuff on eBay. Keeping your collection manageable is something all comic nuts have to deal with - how much is too much? When to sell? My god, will this addiction ever END? And all that jazz. All us collectors have different ways of keeping things at a level that works for them.

My comic boxes of single issues are the lowest amount I've had in years - just 10 short boxes or so. At one point, I had around 25, but I've trimmed a lot of the fat off in recent years (thank God for eBay; seller ID Prometheus11 if you're buying!). I'm learning what I really want to keep (lots of Spider-Man comics, things that have sentimental value, and less of the "flavors of the month"). Sure, in my millionaire fantasy I'd like to have 100 boxes of comics in a vaulted sub-basement, but for now, this is good enough. 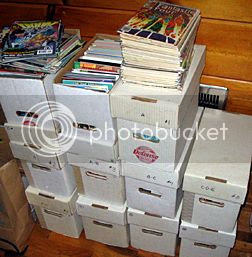 I have carted my collection all over the place in the past 23 years or so, from California to Mississippi to Oregon, to dorm rooms to apartments to houses. Moving comics (and books for that matter) is a real pain. They're heavy!

Unfortunately, while I've gotten rid of many single comics, in the last decade I've stacked way up on trade paperbacks and collections of comics. Trades are the big thing these days - it seems increasingly silly to pay $3 for a single comic when you can buy a nice, more permanent book for $15 collecting several single "floppies." So the trade comic shelf has grown, and grown, and grown....

This isn't even all of it. Several other spots in the house have had to accomodate the spillover. I love my trade comics, and find it harder and harder to find ones that are "disposable." It's the obsession. What can you do? Despite all the complaints you sometimes hear, there really are an awful lot of good comics out there, far more than one man can buy in his lifetime.

With all this comic talk, I should squeeze in a few QUICK COMIC REVIEWS of recent purchases: 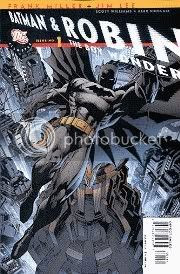 All-Star Batman And Robin #1
Wow, this is really kind of bad. It sounded awesome on paper - "Dark Knight" legend Frank Miller writing, ultra-hot artist Jim Lee drawing. But so far, this latest "reinvention" of Batman is a clunky mess. Miller's in full-on clenched-teeth hardboiled parody mode here, which might work, but it utterly fails to mesh with Jim Lee's slick Image-style artwork. Read this comic aloud and try not to laugh. ("I'm having a date with Bruce Wayne. How cool is that?") It could get better, but this issue is just too lazy and over-the-top and I'm simply not that big a fan of Jim Lee's art. I'm much more looking forward to this winter's "All-Star Superman" with Grant Morrison and Frank Quitely. Grade: D

New Avengers #7
It's heresy to like this series it feels like, but I feel like the "superstar" Avengers book is starting to gel with this issue. The combination of Spider-Man, Wolverine, Spider-Woman, et al is blatantly commercial, yeah, but the clash of personalities and sense of novelty is something I'm enjoying. The art improves tremendously this issue with work by Steve McNiven that's smooth and fluid, less stiff than David Finch who drew #1-6 (I don't hate his work like other seem to, but it does feel like he has two facial expressions in his repetoire). This story arc focuses on the mysterious Sentry, a kind of psychiatric case version of Superman, and so far, it's good stuff with a very interesting cliffhanger. Guilty big-bang comics pleasure, but not as bad as everyone else seems to think. Certainly better than most of the last 5 years of the old "Avengers" comics, in my humble opinion. Grade: A-

Y: The Last Man #35
"Y" has consistently been one of my favorite monthly reads, the tale of the sole survivor of a plague that killed every man on earth, leaving a world of women trying to survive. This is the final part of "Girl on Girl," a sea-going adventure as Yorick and his companions try to make their way to Australia only to encounter female pirates at war with the Aussie navy. Another fine issue, filled with action and adventure, although like Yorick, I'm getting a little tired of seeing all his potential romantic interests bite the dust. It's getting a little formulaic. Treading water a tiny bit, but hopefully the arrival in Australia next issue will give us some exciting new locations in this brave new world. Grade: B+.

Anyway, anyone else want to share their comic collection size and how they keep it under control?
Posted by Nik at 12:27 PM