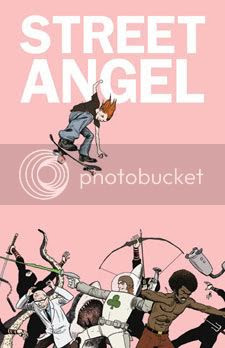 OK, I'm late in coming to this, but I want to give a shout out to the exceedingly cool comic all the hip kids are reading, "Street Angel." I just got the first paperback collection of the series in the mail the other day, and it's a load of skateboarding, ninja-kicking, space-pirating, afro-wearing fun, like many other bloggers out there have said. Published by Slave Labor Graphics by Jim Rugg and Brian Maruca, it's a series to watch.

The theme is simple — Jesse Sanchez is "Street Angel," a homeless orphan eighth grader and avid skater living in the squalor of the inner city. She's also a butt-kicking superheroine who battles the forces of evil wherever they occur, even if it means she might have to ditch class. With equal amounts wacky humor, high action, pathos and occasionally startling violence, Rugg and Maruca tell freewheeling tales of Jesse's adventures. 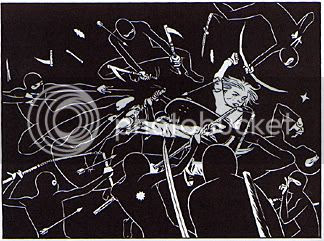 This is the kind of comic people are thinking about when they think, "what will get more people reading comics?" While I'm a superhero junkie, it's a pleasure to see a comic that isn't mired in decades of past continuity, is easily accessible, satirical (as opposed to a parody) and playful. It's got echoes of the style and viewpoint of great 1980s-1990s indie comics like "Eightball," "Zot," or "Dork," but also a distinct voice developing of its own.

The five issues in this collection go through some pretty big tonal shifts. The first issue, for instance, is all high humor and goofy action, with Street Angel battling the nefarious Dr. Pangea, master of the Dark Arts of Geology. But the fourth issue is a pretty much straightforward and remarkably serious look at Jesse's life on the streets. My favorite of the tales is probably the second story, a go-for-broke zany piece featuring pimp-stylin' ancient Inca gods, lost Irish astronauts, time-traveling pirates and ninjas. Only the third story, an oddball religious thriller featuring a cameo by Jesus Christ, doesn't quite work as well as the rest for me.

I love how the creators are able to balance genres and styles so fluently. And Rugg's cartooning is just top-notch, tightly controlled yet fluid and loose, with fantastic senses of storytelling and layout. The trade paperback is an excellent buy - $14 or so for a complete collection of the series, several new short comics, pin-ups and biographies and more. Plus, the cover is pink, and it's in that cute little "mini book" size (about 5 x 8). As an introduction, it really whets the appetite for more adventures of Street Angel — check it out, amigos. 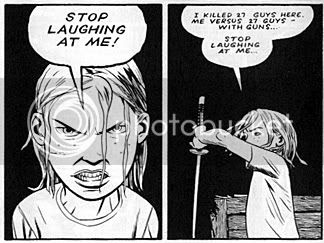