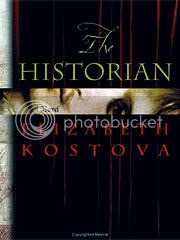 Hope your weekend was swell. My parents came up and we had adventures with them and Baby Peter in the 90-degree heat, and somewhere in there, I finished a book I've been reading. Elizabeth Kostova's "The Historian" is being pushed as the next "Da Vinci Code" — "Da Vinci" meets "Dracula." She famously got a $2 million advance for this, her first novel, which combines Dan Brown-style history, conspiracy and mystery with a dose of Gothic horror.

Unfortunately, the book isn't quite a vampire classic. It's got a great hook — a teenage girl discovers evidence that 15th-century tyrant Vlad Dracula is still alive - well, undead - and well in modern times, that the Dracula legend is no myth. She discovers a mysterious book that's the tip of an iceberg of hidden legend and secrecy dating back 500 years. She learns through a series of letters from her missing father about the search for Dracula and his role in it, and how it changed his life.

For most of its 650 pages, "The Historian" is a solid page-turner, a good summer read that brims over with intelligence and historical tidbits. It's got that tantalizing sense that the "Da Vinci Code" also excelled at. Kostova clearly did her research, and her passages will often make you feel as if you're walking the streets and forgotten corners of Istanbul, Bulgaria, Hungary or Italy. There's some good scary moments. The characters are solid, if not tremendously deep, and the haunting legend at its core is given some intriguing new dimension.

But one big problem for "The Historian" is the structure. Kostova poorly chose to make most of the the book a flashback within a flashback – and frequently, there are flashbacks WITHIN those flashbacks within flashbacks. The story's main thread, told through a series of letters, completely takes over the book for hundreds of pages, and you almost forget the other stories being told. Flashbacks can work well, but Kostova's clumsy structure distances you from the book a little too much.

"The Historian" also wallows a bit too much in historical detail. You know the saying - a great book can never be too long, an OK one definitely can. There's great bits about secret societies, mysterious woodcuts and strange journeys, and I found it interesting to learn about the habits of Bulgarian monks and Wallachian warlords. But around halfway through the book you feel like she's stalling, and the search becomes way too drawn-out and meandering. Too much exposition, not enough forward movement.

I could've forgiven "The Historian"'s quirks if it led to a great payoff. Unfortunately, it doesn't quite. While Kostova's vision of the prince of darkness is compelling and fresh, her climax is peremptory and rushed. Some of the dozens, hundreds of pages used as Eastern European travelogue could have been shifted over to give more weight to her ending. "The Historian" is worth reading if you're a fan of the pulpy pleasures of Anne Rice or "Da Vinci" style globetrotting history. But I don't think it quite works, and it won't ever be as immortal as the Bram Stoker novel it's so heavily inspired by.

Now, on to my next read, "Harry Potter and the Half-Blood Prince"!
Posted by Nik at 3:20 AM