MOVIES: Zombie-Rama, Part One - Night of the Living Dead 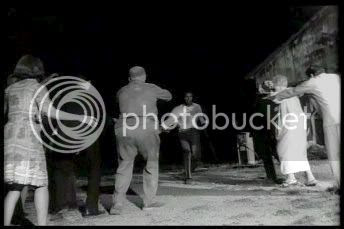 Zombies are huge in the blogosphere right now, so I have a confession to make. Despite my card-carrying geekdom and fanboy love of many things in life, until now I have never seen any of George Romero's "Dead" zombie movies - the 1968 "Night of the Living Dead," 1978's "Dawn of the Dead", the '80s "Day of the Dead" or the just-released "Land of the Dead." Sorry, Zombie Tom, but I officially suck. I am zombie-deprived, or at least... I was.

Really, I'm not a big horror movie dude. I love certain horror movies, like the "Evil Dead" flicks, "Silence of the Lambs," David Cronenberg's "The Fly" (which I wrote about here), and I have an abiding love for the cheesy ol' Universal horror pics (especially the "Creature From The Black Lagoon"). I also saw and quite liked last year's "Dawn of the Dead" remake. I'm not a fan at all of the slash-up-girls "Friday the 13th" type movies, though.

Anyway, I digress. In the interest of educating myself more about all the beautiful bounties in this glorious world (yeah, I could read Faulkner, but too many words), I'm going to view all four of Romero's zombie classics intermittently over the coming months, and ramble on here a bit of my first impressions. (I could watch all four in a row I admit, but that's a lot of zombies.)

So, for Zombie-Rama, Part One, last weekend I finally watched the one that started it all, "Night of the Living Dead." It's a clumsy yet powerful movie, one that is more interesting as influence than flawless entertainment on its own. The plot is simple - a "zombie plague" erupts, and a small band of survivors hole up in an abandoned farmhouse and try to escape a fate worse than regular ol' death.

Underneath the mostly high-school play caliber acting and nonexistent special effects is a still-powerful little parable. It's funny, but watching "NOTLD" for the first time, I found it an interesting transitional movie between "classic" and "modern" horror films. In black-and-white, with a blaring symphonic soundtrack like any number of '50s monster movies, with cheesy actors - yet the movie features an escalating amount of gore, and a nihilistic core unlike its predecessors. There's no happy ending in store here. Another thing that sets aside "NOTLD" from the crowd is that the male hero (Duane Jones) is black - rather revolutionary in the '60s, really. However, Romero has said he didn't cast Jones intentionally, but just picked the best actor for the job. Regardless of intent, having a black man be the leader of the survivors certainly puts an interesting subtext on the movie - and renders its bleak, ironic end all the more startling.

"NOTLD" starts very much like a traditional monster movie, but its unrelenting nature also was quite unique at the time. The movie isn't gory at all at the start, and the zombie makeup seems to consist of blank stares and a little dirt. But once the siege in the farmhouse begins, the zombies get more and more oppressive, and the gruesome fate of a couple of would-be escapees suddenly tears the movie into really gritty territory, with shots of zombies gleefully eating body parts. "NOTLD" is still quite tame by modern standards, but there's a powerful spell it casts, once you get past the rather slow and dull first 40 minutes or so. (Am I the only one to note panicky survivor Harry Cooper's (Karl Hardman) unsettling resemblance to current "Daily Show" cast member Rob Corddry?)

Romero's notoriously thrifty, and "NOTLD" cost a mere $114,000 to produce. And boy, does it show. (Admittedly, the ultra-crappy no-name DVD I rented from Netflix didn't help - "NOTLD" is one of these movies that have been put out on DVD about 42 times so far, and I ended up getting the most basic, low-frills edition out there apparently, with a very poor transfer of an already-low budget film.)

The "Dead" movies have fanatical support out there on the Net, it seems, so it's interesting to come to them as a novice and see what all the fuss is about. Despite my rather zombie-free past, I do see the appeal of the concept - losing your identity, being swept up in a horde of grim not-quite-death, being eaten alive; there's metaphors by the bucketful in zombies, and I'm hardly the first to mention that. (Not that it quite fits anywhere in this post really, but I'm also a big admirer of the current "Walking Dead" comic book and its serialized, character-driven approach to the time-honored zombie survivor tale.)

I'll be checking out "Dawn of the Dead" this weekend (having seen the remake, of course, I imagine it'll feel a little less fresh to me, but it'll be interesting to compare them anyway), and continue "Zombie-Rama" next week sometime.
Posted by Nik at 8:45 AM