Whoosh, back from vacation, and an excellent time was had up in Canada and Washington. Full report and pics to come in the next day or so (I'm off work 'til Monday still, so plenty of time to recuperate from the post-vacation daze -- should plan time off this way more often).

Anyway, today I finally saw that small independent art-film about a young boy who learns the ways of the world, "Star Wars Episode III." I'm not going to do a huge essay about it because 98.4% of the blogosphere already has. I will say I dug it, and Avril will go see it tomorrow (we're trading off Baby Peter watching duties to see it in shifts). It's better than the previous two for sure, some great moments and popcorn-munching fun, and even a little lump in my throat at the end, and what more can you really expect from such movies? It's not like it was when I was 10, but at 33 it's still a pretty good time. 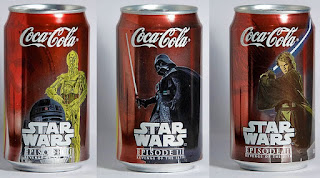 One thing non-movie related that gets me, still, is the merchandising juggernaut we see every time one of these comes out. Traveling through British Columbia last week I saw the same nonstop advertising that's consumed the Western world, such as cell phone ads, soda pop, etc. Rather odious this time out, for the first time I'm aware of George Lucas has authorized his actual characters appearing in TV ads. Hey, they're his babies, but man, Chewbacca hawking ring tones is so far beyond selling-out they should create a new name for it.

And does anyone else find it odd, using Darth Vader's image to sell so many soda pops? Think about who this character is, what he does in this movie and the original movies. It's like having Jeffrey Dahmer Barbecue Sauce or Saddam Hussein brand toothpaste, isn't it? I guess an intergalactic mass murderer and butcherer of the Jedi as a product spokesman is cheaper than getting Paris Hilton, though...