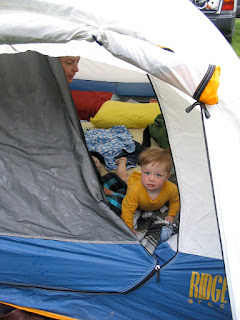 We survived our weekend getaway to Newport, rainy on-and-off though it was (damn those weather forecasters!). It was warm-up for our bigger weeklong vacation that starts next Monday up to Canada and Washington, to see if traveling with the 15-month-old will cause sheer and utter brain death. Got to try out the best $5 purchase I've made in weeks, the baby leash. Yeah, I was one of those people who saw somebody toting a toddler along with one of these contraptions and thought, gosh, that's so inhumane, it's a baby, not a dog, and other squishy-hearted nonsense. That was before we discovered the damage to himself and others a toddler can cause at this point, when ideas such as "I think I'll run off the edge of that cliff now" and "If I climb to the top of the picnic table and hop around, surely I won't fall off and crack my head open like an undercooked egg" make a lot of sense. So the leash worked wonderfully on the beautiful seaside beach next to our campground (Seal Rocks, which we highly recommend if you're in the Newport, Oregon area), and elsewhere we took the little monster.

We also survived camping with Baby Peter, although for some reason the lad has a pathological fear of tents. He was nervous going inside and if either Mom or I left the tent with him still inside he would freak out quite loudly, even if the other parent was still with him. It was all quite tragic, but he calmed down enough with us both in the tent and we all slept pretty good actually. And the people in the next campsite had an annoying barking dog so I didn't feel too bad about the occasional baby screech bugging them.

Any time we think it's too tough traveling with him, I have to remind myself that my parents actually spent an entire year traveling around Europe in a motorhome in 1979 with my brother and I, when we were 5 and 7 respectively. Compared to spending a year in a motorhome with two battling boys, one is probably a piece of cake.