OK, if you don't like hearing about other people's vacations, move along. As mentioned in the last post, we just got back from a week exploring the lands north of Oregon. Had a great time overall, although carting a 15-month-old whirling tornado of a temperamental toddler along for the ride adds a whole new dimension to vacation stresses. It was worth it, but we've both agreed we're not doing any more long trips until Peter's, oh, 23 or so. 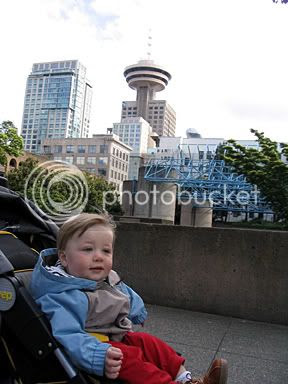 Peter in Vancouver
First stop on the trip was all the way up in Vancouver, British Columbia, Canada, about 9 hours north of home. It's a great city, a surprise to find such a huge metropolis kind of on the northern edge of civilization like that. It feels like a cross between a cleaner San Francisco and my wife's home of Auckland, New Zealand, but with its own distinct vibe. It has a huge Asian influence; in fact there were times we felt we were in an Asian city, but then it's surrounded by these huge snow-capped mountains like Anchorage is. We liked it quite a lot, even if finding our way around was sometimes daunting. There were a ton of restaurants -- we could've spent a month just eating out in the places within a few blocks of our hotel. 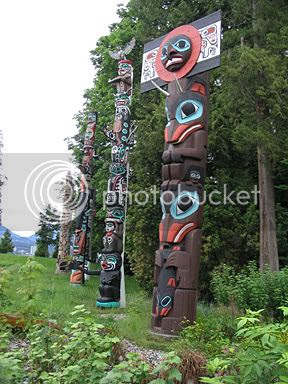 Totem poles at Stanley Park
It was both of our first trips to Canada - it was awesome to see an actual Petro-Canada store like my old pal Jay Marcy worked at, and like Jules in "Pulp Fiction" says, "it's the little things" -- the currency change (like most countries it has far more colorful money than the U.S.), no left turn lanes, the queen's image all over (she happened to be visiting Canada too that week), they call the bathrooms "washrooms," in general drivers seemed more courteous (everyone was using turn signals). But then again, we're judging a huge country from a tiny little bit of it we visited. It was swell, though, and I'd love to see more of British Columbia someday, the natural part of it. 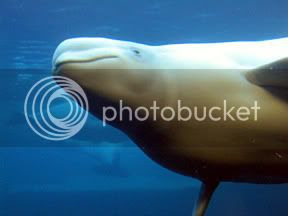 A fantastic beluga whale we saw at the Vancouver Aquarium
Following three days and nights in Vancouver, we came back to America and down along Puget Sound, taking a ferry across to avoid Seattle traffic and ending up in Port Angeles, Washington, on the northeastern edge of the Olympic Peninsula. From there, we made another brief trip into Canada, crossing the ocean on a ferry to the British Columbian capital of Victoria, on Vancouver Island (a huge place nearly the size of Oregon). We were on foot, so we couldn't see a lot of Victoria but the compact and visually stunning downtown, full of Victorian style architecture and nice shops. 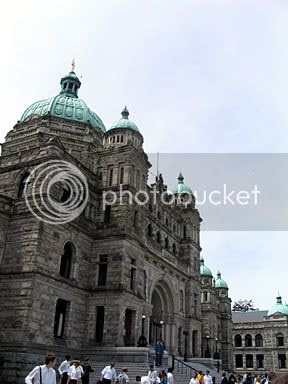 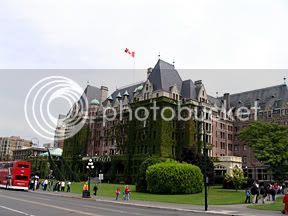 An ivy-encrusted hotel far beyond our price range
We only had an afternoon there, but Peter cooperated, sleeping through most of our exploration. Then a very queasy ride back over on the ferry to America. Curious about customs -- driving into Canada via Vancouver, we had only the most cursory check - basically, a guy asked us where we were going and for how long. But crossing on the ferry, we were definitely in John Ashcroft's America. An armed Coast Guard boat escorted us until the sea border, and we were quizzed several times by American officials about our intentions, duration of stay, passports checked, what we bought, etc. Just in case Baby Peter was an al-Qaeda sleeper agent, I guess. Of course, we could've driven through the border with a trunk full of anthrax, but so it goes... 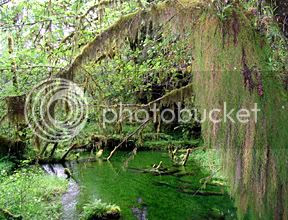 "How green is it?" "None more green."
Returning to Port Angeles, we explored the Olympic Peninsula some. The peninsula is an amazing place, one I'd been wanting to return to since my last visit in 1997. It rained a lot, but then again it is a rain forest. We had a nice soggy trek through the Hoh Rain Forest. 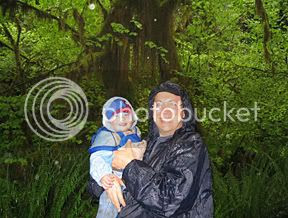 Very wet in the Hoh Rain Forest
After spending three nights in Port Angeles, we drove southwest along Washington's west coast, a grand green rolling countryside, skirting the edges of the Olympic National Park. It's a place that's been heavily logged and the forest is at all different stages of regrowth. We motored through Aberdeen, Kurt Cobain's hometown, then down across the border and a three-mile bridge across the Columbia River into Astoria, Oregon, where we spent our final night away from home (in the best hotel yet, with an indoor swimming pool!). We made a visit to Fort Clatsop, the place where Lewis and Clark camped for the winter 200 years ago on their expedition. I'm quite interested in Lewis and Clark and had been wanting to visit Clatsop for a while - they have a nice replica of their fort which puts you back into how remote and damp and dismal it must have been for them, two centuries ago. How much that area has changed since then. From Astoria, it was a mere 5-hour drive home, and Peter even obliged us by napping for nearly two hours of it.

I've lived in various parts of the West and South and am pretty sure the Northwest is my favorite part of it. We live in the southern edge of it, where it's a little too hot and dry in the summers for our taste, but it was terrific seeing some of the damper, greener and slightly more culturally active parts of the region. Soon as Baby Peter is off to college, maybe we'll do it again.
Posted by Nik at 12:21 PM