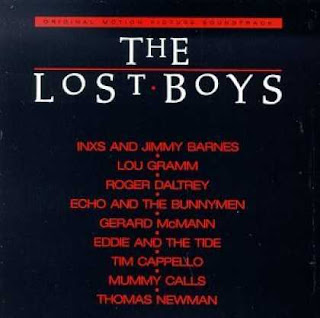 When a soundtrack is at its peak, it evokes a movie but also kind of surpasses it -- you listen to the crashing cadences of Strauss for "2001: A Space Odyssey" or the jangly retro hits of the "Rushmore" soundtrack, and you find yourself reliving your favorite bits of the movie, but you also kind of create an idealized version of it in your head. It turns out "Top Gun" is actually a kind of terrible movie if you watch it today without the affections of nostalgia, but man, whenever I hear Kenny Loggins sing "Danger Zone," I'm 15 again and feel a spontaneous quiver of excitement, as a movie that's way better than the actual "Top Gun" ever was unspools in my brain.

Which brings me to "The Lost Boys," the 1987 teen vampire movie that chews up "Twilight" and spits it out in gory little pieces. An early work by "Batman & Robin" auteur Joel Schumacher, it's all smoke machines, hair-spray fashion and pouty angst, but it's still actually a heck of a lot of fun. And the soundtrack is a tasty slab of vintage '80s bombast and cheese, one I have a rather unaccountable affection for. Unlike a lot of the big '80s movie soundtracks it doesn't boast wall-to-wall hits like "Footloose" or "Dirty Dancing" did, and your biggest stars are INXS and Echo and the Bunnymen. (If they'd paid better, you'd have thought they could've gotten Depeche Mode and Sisters of Mercy to sing on this thing.)

But "The Lost Boys" soundtrack in its sunglasses-at-night sweep perfectly captures the glossy feel of the movie, which was Goth without the gloom, sexy without being nasty about it. Jason Patric, an evil pre-Jack Bauer Kiefer Sutherland and Jami Gertz brood a lot and the two Coreys provide comic relief. Bill from "Bill and Ted's Excellent Adventure" plays a vampire. It features one of the great cinematic closing lines. But it's glossy trash, of course. 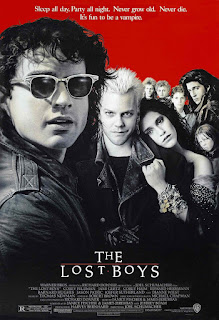 Lou Gramm's screeching anthem "Lost in the Shadows" pops up several times in the movie -- I particularly like the breathy urgency he puts in as he sings against the beat. Gerald McCann's theme song "Cry Little Sister" is melodramatic and gaspy Harlequin romance Goth. The marvelous cover of The Doors' tune "People are Strange" by Echo and the Bunnymen nicely captures the movie's tone of parody mixed with menace. Another cover tune I've always liked here is Roger Daltrey's take on Elton John's "Don't Let The Sun Go Down On Me." (A song tailor-made for vampire flicks.)

Bodybuilder/sax man Thomas Capello's bizarre scene singing "I Still Believe" is so insanely homoerotic and over-the-top in the flick that it spawned a "Saturday Night Live" parody decades after the movie. (Seriously, why didn't someone tell the guy to put a shirt on at least during the filming of this scene?) But while you can't watch that scene without giggling, the actual song itself isn't terrible, in a Huey Lewis if he were a bodybuilder kind of way.

But sometimes a big slab of cheesy music from your youth is what you need. I haul out the Journey's "Greatest Hits" disc sometimes and still feel my blood start pumping when Survivor's "Eye of the Tiger" theme music from "Rocky III" rings out. "The Lost Boys" soundtrack sold less copies than "Top Gun" and "Flashdance" did but in some way I'd call it the perfect '80s movie soundtrack -- very little irony, lots of bombast, and hooks that may leave you feeling a bit of guilty pleasure but still won't quite stop echoing around your brain.
Posted by Nik at 6:14 PM