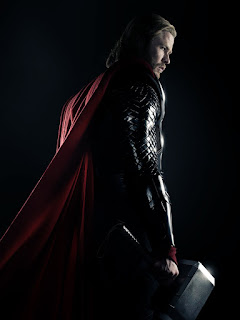 It's strange for a 30-year comic book geek to admit, but I never really much cared for Thor. When I was in my younger avid collecting days there were only a few characters whose books I never bought, and one of 'em was Thor. The long hair, the bare arms, the high-faluting fancy talk? It all seemed too lame to me.

But yet Thor is a compelling character, which took me a while to realize -- a god who walks among men, caught between two worlds, and now that I'm less of a nerdy fanboy I've found some very good Thor comics such as the legendary ones by Walt Simonson and the sturdy originals by Lee and Kirby. The highly entertaining new movie "Thor" reminds me a lot of "Iron Man" -- it takes a B-grade hero who's been in far more mediocre comics than truly great ones over his 50-year history and distills it down to its essence.

"Thor" combines culture clash with smashing action and adventure and feels like something rather new among the current glut of comic movies. It's not a story of some humble nerdy type who learns to become a hero. It's got equal elements of Lord of the Rings-style fantasy and superhero action. It's a tale of a god who learns humility, wrapped up in lots of family drama dynamics and good old frost giant-smashing. It's got a good solid sense of humor and whimsy which you kind of need when dealing with Norse gods throwing giant hammers about, yet it knows when to pile on the serious as well.

What I liked:
I wasn't sure about casting relative unknown Chris Hemsworth as Thor, but he pretty much knocks it out of the park in a starmaking performance -- rather than having the character speak the typical mangled Elizabethan style that the comic did for years, he adopts a more general formal tone. The scenes where Thor is stranded, powerless, in a small New Mexico town are great culture clash fun.

A relentlessly scenery-chewing Anthony Hopkins makes for a logical Odin, while Tom Hiddleston does a very good turn as slippery Loki, although the script fails him sometimes with muddled motivations and character turns. Natalie Portman brings nice charm to Thor's earthly love interest Jane Foster, while director Kenneth Branagh ably balances big-action moments with smaller character beats that make this feel a bit less disposable than it might have. 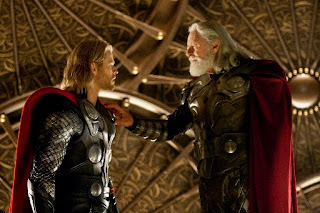 And it's a pleasure to see a superhero movie that really embraces the cosmic scale -- one failing of, say, "Iron Man 2," is climactic battles that kind of disappoint. Here, we see giant armies of frost giants, a Thor/Loki throwdown that's quite epic, and the extraordinary Jack Kirby creation the Destroyer brought to vivid life.

What I didn't like:
Well as usual, the "3D" edition of the movie is a gimmick and not worth paying extra for -- I'm actively avoiding 3D versions of most movies when I find them, as the 3D films tend to be projected too dark, rarely utilize the format well and generally just a big hype.

The one thing about "Thor" that sticks with me is the general look of Asgard and the Asgardians -- I'm not quite sold on it, yet I'm not quite sure how I would've done it. They're all very shiny-armored and colourful, but I wonder if it would seem more "real" if Asgard looked a bit more lived in rather than like a lot of plastic models. Yet it is a god's realm, and who really knows how that's meant to look? As I've said before, it's a fine line between making Asgard look cool and having it look like a bad rock video. It's also a shame to see Rene Russo relatively wasted as Thor's mother, but so it goes.

Despite all the very solid acting talent and one of my favorite creators Joss Whedon at the helm of next year's giant "Avengers" movie, I'm still rather uncertain about it. Frankly the weakest parts of "Iron Man 2" and "Thor" are those where they try to awkwardly shove in a "shared universe" and twee cameos. (Although seeing ace archer and "Avengers" co-star Hawkeye, briefly, in "Thor" is pretty sweet, actually. Guess I'm still a comics geek after all.)
Posted by Nik at 12:01 AM