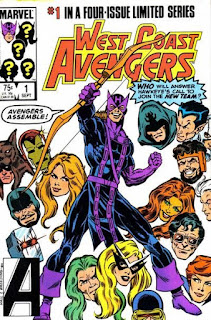 This time out, rather than one particular hero, let's look at a whole team of them that I always had a thing for.

Who: The West Coast Avengers were the '80s "spin-off" Avengers comic, based in California and led by one of my favorite Avengers, loudmouthed but goodhearted archer Hawkeye. The team also included at its start Hawk's wife Mockingbird, Iron Man, Wonder Man and Tigra, all set up in a former Hollywood star's mansion and fighting crime on the West Coast -- which seemed quite a novelty at a time when 99% of comic book superheroes seem to live in Manhattan. Being a Californian myself, the WCA, as they were known, felt like "my" team.

Why I dig: The West Coast Avengers were the underdogs of the Avengers franchise, lacking the big heroes (except for Iron Man, but his involvement seemed half-hearted) but scrappy and amiable. They'd battle bizarrely goofy villains like Master Pandemonium, whose limbs popped off at will; Razorfist, a guy whose fists were both replaced by large knives (which would seem to make daily life outside superhero battles rather unpleasant), or Cactus, who was, yes, a sentient walking cactus. Not exactly Dr. Doom.

The book had two key runs -- a colourful, high-action era written by Steve Englehart and drawn mostly by Al Milgrom, and a more modern, grim 'n' gritty take by John Byrne for a dozen issues or so. I also really love the original miniseries written by Roger Stern which introduces the team and is probably the best single story the book ever had; a team of novice and insecure Avengers move to California and end up fighting one of the world's strongest villains.

The ongoing book had its bumpy road, and charms  often mired in kitsch -- Wonder Man's almost uniformly horrible costumes, Tigra's bimbo supreme troubles, Hawkeye's hearty temper tantrums, the one-note approach to much of the characteristation. (The West Coast Avengers were generally a whiny lot.) Englehart is going for a very silver age tone, which makes the book look almost childish sometimes. The arguable highlight of Englehart's run is the twisting 7-part "Lost in Time" saga, which splits up the entire team over time and ends up juggling several different story threads at once in a fun tour of Marvel Comics history. The team expanded to include other interesting members or quasi-members like Thing, Firebird and Moon Knight. 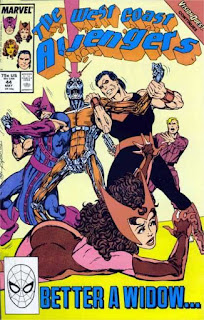 John Byrne came along after the book had been puttering along for a few years and promised to do his patented "reimagining" and revitalize it. Now, I loved Byrne's work on the book at the time -- his art, bold and dynamic, was a huge improvement -- but read today, it's got problems. He relied on shock over sensible plotting -- the entire "Vision Quest" arc which systematically destroyed the long-running happy Vision and Scarlet Witch marriage, for instance, has left both once-beloved characters pretty much screwed up to this day. There's a lot of changes over his short run, and it's still exciting stuff to read, but Byrne failed to really follow through with any of it, with many subplots just trailing off. The shortened nature of his run over an editorial dispute on the book leaves it lacking. Yet a lot of the changes still echo more than 20 years later -- turning Scarlet Witch into a raving nutter, for instance, or the goofy fun Great Lakes Avengers.

I didn't really follow the WCA after Byrne left -- the few issues I've read after that were almost uniformly terrible. The book ended with #102 in 1994 and was replaced by the "This is why 1990s comics sucked" poster child book Force Works. But for a little while, West Coast Avengers was a fun superhero team book, not one that changed the world by any means, but its easygoing camaraderie and sense of fun make it memorable. And how can you not love a B-level superhero team who inspire an entire groovy rap album?