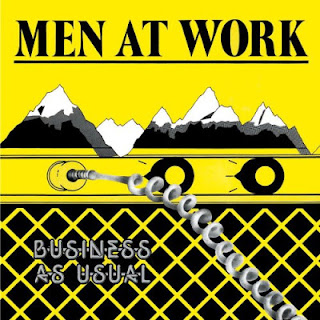 A few words in praise of Men At Work. There's certain songs I can listen to a zillion times and they never get old -- Bowie's "Ziggy Stardust." Peter Gabriel's "In Your Eyes." Sebadoh's "Ocean." Tom Waits' "Downtown Train." And right up there is Men At Work's "Down Under." Sure, it's a silly song about life in wacky ol' Australia, where the women glow and men plunder, but for some reason its goofy flute-laden choruses and pub singalong vocals never get old to me. I guess it's the thing about hearing something when you're young -- Men At Work's "Business As Usual" is as far as I recall the very first album I ever bought, back in 1983 or so.

There's a lot of great songs on that one-hit wonder album, from "Who Can It Be Now?" to lesser gems like "I Can See It In Your Eyes" and "Down By The Sea." But "Down Under" is the one I return to again and again. It sums up mysterious worlds -- I wanted to go "Down Under." (And I sort of did, when I met and married my kiwi wife, if you count New Zealand as part of "Down Under.")

But best of all is those lyrics, which I spent hours listening to to try and decipher. What the heck was "vegemite"? What's a "combie"? Did the guy really sing "flying in a tent of clay?" (No, "lying in a den in Bombay) (Digression: There's a whole art form to misheard lyrics, also called 'mondegreens,' and an awesome web site about them is www.kissthisguy.com)

The real words for this groovy little song may not be poetry, but somehow, they always get me humming along...