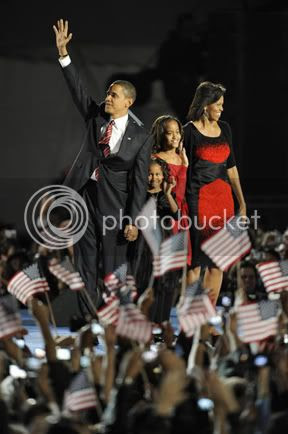 Wow. What a moment. What a fine day.

I don't care your politics, if you aren't the slightest bit moved by what happened today, you're incapable of seeing the bigger picture. Just 150 years ago, Barack Obama might well have been enslaved to another human being. Fifty years ago, in certain states he could have been beaten to death just for trying to vote. When he spoke of 106-year-old Anna Nixon Cooper tonight, and her journey from "a time when there were no cars on the road or planes in the sky" to today when "she touched her finger to a screen, and cast her vote," for a moment I felt the quivering membrane of history, and how quickly something can change.

No, he won't be perfect, no, he won't "save us all," but by gosh, I am proud of what America did tonight, and while I can't be there to celebrate, I'm lifting a glass or two to cheer him on.

President Barack Obama. Wow. It's easy in all the clutter and noise of our 24-7 wired world to downplay what a gigantic thing this is, that a black man is now President-elect of the United States of America.

The sun is shining in New Zealand tonight after rain much of the day, and we saw a big honking rainbow out the window of our kitchen. Yeah, there's trouble in the world, but just for tonight, let's bask in how we much we've done toward atoning for the scars that have long marked America's shining optimism.
Posted by Nik at 7:16 PM

Email ThisBlogThis!Share to TwitterShare to FacebookShare to Pinterest
Labels: politics, the US of A