One election down, one to go!

Yeah, man, it's all-politics week on Spatula Forum, by god, because it sure seems like there's nothing else going on in the world! A handful of random musings on elections both in America and here: 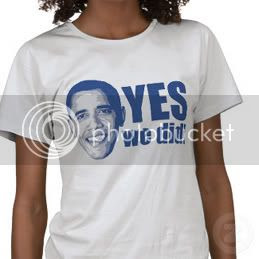 • Obama-Mania: Yeah, I know they're all just trying to make a buck, but when was the last time you saw everybody selling T-shirts with the president's face on them? Or newspapers selling t-shirts with their own front page on them? ...The guy who bought 10,000 copies of the Bellingham Herald as an investment, however, I don't know about him. He'll be like the guy with 10,000 worthless copies of the "Superman dies" comic in his basement, won't he?

• "Palin thought Africa was a country, not a continent"?... Hell's bells, I don't like the woman but even I have trouble believing that could be true, but they were saying this on FOX News of all places. The walls have fallen and all the factions are spilling their guts, it seems. If even a fraction of what's being said is true, I thank the voters Sarah Palin never got to be within a few heartbeats of the White House. Will she be back in 2012? Can't wait for all the tell-all books.

• Turning to New Zealand... Imagine for a moment that in a US Presidential election debate not one but BOTH of the leading candidates admit they're not really all that religious. Can't see it? That's what happened in NZ's final leaders debate between Prime Minister Helen Clark and National's John Key before tomorrow's election. The kind of far-right fundamentalism exemplified by Palin is fairly non-existent as any kind of major force here, pretty much confined to very minor parties. For both leading candidates in an election to stand up and say they don't know if there is a God would just never happen in the US. About a third of New Zealanders call themselves non-religious, quite different from America, so maybe the candidates here just know their audience better. Either way, interesting difference.

• So tomorrow is our New Zealand election and yes, I know, it's been historic and world-changing ... wait, that's the American one. This one has been pretty dull, with National likely to assume power after nearly 10 years of Labour, but still, it's my first time voting down under and I'm excited to do that. The MMP system means that I cast two votes, one for party and one for a candidate, and I can split those up if I want to (vote for Green Party as a party and a Labour candidate, for instance). So you're able to strategize your vote a bit here and minor parties are way more influential than they are in the US. It's very likely some kind of coalition between National or Labour and the smaller parties will have to be formed to get the magic 50-percent of Parliament mark, so while the voting is tomorrow it could well be days before we really know who's going to run the country the next three years. I'll report tomorrow night from Election Day!
Posted by Nik at 4:55 PM

Email ThisBlogThis!Share to TwitterShare to FacebookShare to Pinterest
Labels: New Zealand, politics, the US of A