Here we are at #6 on my alphabetical journey through my 25+ years of comic collecting, and we hit the heart of surreal superhero-dom -- the fabulous Flaming Carrot. 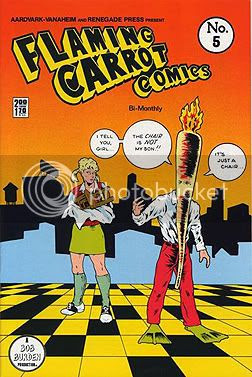 I first discovered the Flaming Carrot during the glorious black-and-white comics boom of the mid-1980s, where long-gone publishers like Renegade, Eclipse, First and more sat side-by-side with Marvel and DC at your comic shops. For a lad of 14 or so, it was a cool time to dabble, and nothing on the racks was weirder than Bob Burden's cartoon creation. With the wacky name, eye-catching design and tangible sense of fun that jumped out of the pages, Flaming Carrot Comics was something I had to check out.

The first issue I saw, #5, was like diving into a Lewis Carroll poem or something – a drunken, amnesiac kind-of superhero Flaming Carrot wanders through the city having bizarre adventures with the Frankenstein Monster, martians, hot groupies and a guest appearance by Death himself. Burden's comic was quite stream-of-consciousness – the art, admittedly, was competent rather than dazzling, with a chunky amiability despite the lack of polish. It was less a story than a series of goofy moments strung together, like Marx Brothers meets Spider-Man or somesuch.

A highlight for me this issue was an out-of-nowhere soliloquy by the Carrot that achieves a kind of T.S. Eliot grandeur to me -- "I sit on the lawn ... a child in the summer ... holding my head and looking at it carefully..." Tremendously oddball yet evocative stuff, and you sure didn't see that in Marvel Comics then. It struck a spark in me then, a kind of creative match that made me want to create my own strange characters.

Burden's infectious creativity showed me that no idea was really too strange to not just go with, that you didn't have to be all smooth and refined, and I soon ended up scribbling away pages and pages of a quasi-comic short story called "The Spongy Chronicles" largely inspired by the Flaming Carrot's insane world. It's daft stuff looked at now, of course, but a few years later I took some of the things from that and used it to create the small-press comic Amoeba Adventures, which I started in college and ran with through much of the 1990s and am moderately proud of. It was hardly Nobel Prize-winning material but it did win some fans and friends and was a hell of a lot of fun, and I have to admit I wonder if I would have been inspired to do it if it weren't for the Flaming Carrot. (In fact I even named a villain in the series "The Asbestos Mushroom" in a tip to the Carrot hat.)

Bob Burden has continued sporadic adventures of the Flaming Carrot to this day (the muddled movie misfire "Mystery Men" was also based on some of his creations), and it's best when it still has that what-the-hell randomness that drew me to it in the first place. Flaming Carrot, I salute you. Ut!