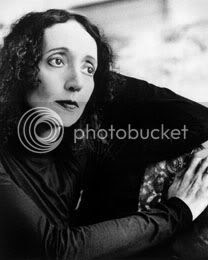 The world of Joyce Carol Oates is a grim, unforgiving one, flecked through with a strange and compelling beauty. The thick-as-a-tombstone career summary, High Lonesome: Selected Stories 1966-2006, offers a vivid introduction to this dazzling talent.

Oates has a tremendous reputation in the literary world – winner of the National Book Award and PEN/Malamud Award for Excellence in Short Fiction – but I have to bashfully admit I'd never read any of her fiction until now. As a reader coming to Oates completely new, I found High Lonesome an unforgettable read, ripe with her distinctive style. Nearly 700 pages of short stories sped by in a haze.

For novices, Oates' work carries some of the operatic scope of Flannery O'Connor or Patricia Highsmith – both also women writing diamond-sharp prose about unpredictable horror, lust and despair coming into the lives of everyday people. Just in the first 10 stories, we deal with molesters, murders, infidelity, rape, suicide and more.

You'd think that would be depressing, but Oates' gorgeous, painterly writing gives even the darkest of subjects a glimmer of beauty, her prose flowing smoothly but rarely showing off, sculpting figures and places with a few choice words. "Pop Olafsson was this fattish bald guy with a face like a wrinkled dish rag left in the sun to dry," she writes in the devastating title story, "High Lonesome," and you can see Pop's battered face, his hopeless slumping form. Her characters breathe and sweat, and rarely feel artificial.

High Lonesome is divided into a survey of Oates' stories over the last 40 years, split into sections by decades. It starts with some of the finest stories in the book, her most recent work, and then moves back to the 1960s and on forward. The earliest stories from the 1960s tend to be more overwrought, lacking the subtle elegance of her later writing, but High Lonesome shows the ripening of Oates' talent.

Oates has a truly enormous body of work – more than 30 novels, several novellas, many books of essays and poetry, and dozens of collections of short stories that "High Lonesome" draws from. Several of the stories here are among Oates' best known – "Where Are You Going, Where Have You Been?" for instance – and the stories were selected to avoid work from recent, still in-print collections. While not every story is a gem, many of them linger on hauntingly in the memory.

Oates moves easily from suburban angst to rural tragedy, capable of rendering tales in a down-home first-person candor or with a polished, omniscient sheen. She seems capable of taking on any genre she pleases – "*BD* 11 1 87" is a subtle science-fiction story with a powerful twist, for instance.

Several of the stories are bittersweet romances, with nary a murder in sight, while others lull you into thinking the tale is one thing and then shift and bend with dizzying skill. Her protagonists range from assassins ("Last Days") to victims ("The Gathering Squall") to the desperate and hopeful ("The Lost Brother"). Loneliness is a recurring theme, as well as vengeance, and the terror of sudden violence.

"…Each story is an opening into the infinite, abruptly terminated and sealed in language," Oates writes in her afterword. With her versatility and keen eye for the hope and heartache to be found in life, Joyce Carol Oates' High Lonesome makes the endless possibilities of the written word infinitely enjoyable.
Posted by Nik at 3:52 AM