Y’know, I have a confession to make – I don’t much care about Tom Cruise’s personal life. I'm a movie buff, and I’ve mostly enjoyed Cruise and the kinetic energy he brings to his roles. But once he’s off the movie screen, I’m not really interested in his marriage, his religion, or his appearances on “Oprah.”

The Cruise backlash perpetrated by gossip columnists is one of those things we’re all kind of aware of, like a mosquito buzzing in your ear. Yeah, Katie Holmes, yeah, jumping on couch, yeah, yeah, yeah. But the bottom line for me still is – how are the man’s movies? 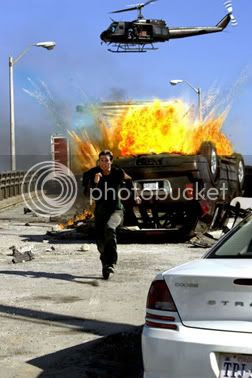 Well, the summer-season opener “Mission: Impossible 3” won’t be remembered as Cruise’s finest film, but it certainly gets the job done.

Directed and co-written by “Lost” creator J.J. Abrams, it’s the best movie of a series that’s mostly failed to live up to its considerable potential. The first “Mission: Impossible” was convoluted to the extreme, the second so over-the-top it got absurd. By adding a much-needed human dimension to Cruise’s Ethan Hunt, a strong supporting cast and a straightforward story, “M:I3” delivers its summer-movie punch.

We know what to expect of these missions by now – that rousing theme music, intricate sequences of cat-and-mouse spy games, fancy technology, impossibly realistic disguises, lots of things blowing up. Abrams does what he can to use all these tools and still shakes up the “formula” a bit, especially with an opening sequence that’s startling and savage.

Ethan Hunt is trying to settle down – in the previous movies, we never even realized he had a life outside of the action, but here, he’s got a lovely civilian fiancee (Michelle Monaghan) who thinks he works for the Department of Transportation.

Hunt’s no longer a field agent for the super-secret Impossible Mission Force, but when a former protégé of his (Keri Russell) is captured by international arms dealer Owen Davian (Philip Seymour Hoffman), everything changes. Davian’s a brutal, uncompromising villain, and his willingness to up the ante makes this a fight more personal than any Hunt’s ever faced.

Plot aside, the “M:I” flicks are all about those elaborate action sequences. And the set pieces verge on spectacular, particularly an infiltration of Vatican City and a daredevil mid-air sequence in Shanghai. Abrams keeps the plot moving, even if his direction of action sequences is a little hectic (will action directors stop shaking the camera so much already?). Unlike the other “M:I” movies, this one boasts a slew of good actors backing up Cruise – recent Oscar winner Hoffman makes an excellent seedy villain, and has a couple of killer scenes. Laurence Fishburne and Billy Crudup also make an impact as Cruise’s agency superiors, and Monaghan brings a sweet realism to the underwritten girlfriend’s role.

Cruise is, well, Cruise, and it’s up to you if his wacky off-screen performances lately make a difference in how you view him onscreen. He’s perfectly fine as Hunt, who’s less a character than a steel-eyed super-spy stereotype, and as always, he’s willing to throw himself wholeheartedly into the physicality of a role. He sweats for the viewer.

(When you think about it, Cruise spends so much time running in his movies, from “The Firm” to “Minority Report” to “War of the Worlds,” that he ought to do a Nike shoe commercial.)

It all starts to falter a little in the final act, unfortunately, and there wasn’t quite enough of the always-excellent Hoffman for my tastes. The “Mission: Impossible” movies have never quite risen to the realm of classics. Ethan Hunt is no James Bond, and while they’re often grand escapism, they never dig deeply enough to make you a true fan.

“M:I3” comes the closest they’ve come to being memorable, and it’s certainly a decent use of your $7 ticket price if you’re looking for summer thrills.