Well, we can retire the remote control for the summer – except for DVDs and a few programs here and there, the majority of our TV watching wrapped up this week with the season finales of the handful of shows we watch.

We tend to watch TV by "appointment" rather than just turning it on to flip around, so a show's got to be a pretty big fave of ours to keep its "appointment" status. Of the shows the wife and I watch regularly, here's how they wrapped up for the season: 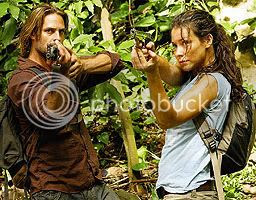 The best show on TV, far and away, a sprawling, complex meditation on fate, destiny and magic. Ignore the folks who say it's all tease – "Lost" is equally about the journey as it is the destination, and the producers are building a fantastic, labyrinthine mythology on their mysterious island. Season 2 added more layers to the island's tale, with several "holy crap!" twists and an appropriately apocalyptic season finale. Sure, there were lulls, but I often enjoy the character-building flashbacks as much as I do the main action – segments featuring Jack, Sun and Jin, Mr. Eko and Locke in particular offer up tremendous human drama. The finale delivered lots of answers, set up more enticing questions (what was with the statue?) and promises an interesting status quo for Season 3. Most shows don't try to do anything nearly as epic as "Lost," and the ones that do usually fail. If it keeps up the standard it's set in its first two seasons, "Lost" is one for the time capsule. Grade for season: A

'My Name Is Earl'
The only new show I started watching this year, led by the very amiable Jason Lee. The "karma" gag could easily have gotten too cookie-cutter, but so far, the show is funny, with a backhanded moral lesson each week. Props for focusing on the "white trash" world between the coasts rather than yuppies in Manhattan. I do think Lee is often overshadowed by the terrific supporting cast (especially Ethan Suplee as Earl's half-wit brother Randy), and the endings of episodes often get a little too predictably sentimental for me, but overall, "Earl" is a lot more interesting than most TV sitcoms. Grade for season: B+ 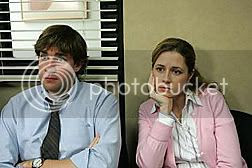 This year, the American "Office" finally surpassed the British one for me. The amazing cast all found its groove, from the lead players (and remarkably complex Steve Carell) to the smallest supporting actor. No show on TV right now so carefully balances the line between cringing and laughing. Compared to the British show, it's far more optimistic and in that quintessentially American – the Pam/Jim relationship is one of TV's most pleasantly romantic. With the late, lamented "Arrested Development" gone, it's the best comedy on TV. Grade for season: A

'The Simpsons'
To quote Bart Simpson, "…meh." The 17th season was the first one where I really felt the quality was slipping, and for the first time, we didn't make "The Simpsons" must-see TV on Sunday nights. While it's still head and shoulders above most shows, the fact remains that after 300+ episodes it's all starting to feel a little played out. The kick is gone. How many times can Homer and Marge's marriage be in trouble, Bart get expelled or Lisa learn something life-affirming? The season finale was particularly wretched, an almost laugh-free baseball-centric episode. I know they're planning a few more seasons after this one, but part of me wishes the show would go out before it totally wears out its welcome. It's stopped being "appointment TV" for us. Grade for season: C+ 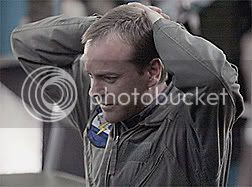 Is there a more gleefully absurd show on TV? Probably not, but there's also nothing quite as thrilling as Kiefer Sutherland's antihero Jack Bauer on a rampage. This season, with its tangled tale of presidential corruption and assassination, was my favorite yet. Sutherland has a steely gravitas that makes the whole ridiculously bombastic contraption work. (Have a drinking game: take a shot every time Jack Bauer yells "Dammit!" or "There's not enough time!" Admit yourself to rehab by midseason.) Now, if you sit down and map out the entire 'day' played out over the 24 episodes, "24" all falls apart. But in hourlong chunks each week, it's better action than most big-budget blockbusters, and this year really kept up the momentum (and no cougars!). What other show on TV features lines like, "I was so worried when I heard you'd kidnapped the president"? Extra points for a shockingly downbeat surprise ending to this year's season finale. Grade for season: A-

'Scrubs'
The humane doctor comedy-drama's fifth season was all about growing up, with multiple pregnancies, life changes and more for the man-boy J.D. and friends. And like puberty, it was a kind of uneven season. Lots of offbeat humor as always, but there was a sense of running in place, repeating story arcs that have been done before (Cox's disillusionment, J.D.'s failure to get a girl). Also, the whole "play a cheesy song over the closing montage of the episode" motif is really played out for me, to the point of becoming self-parody. Still, the show is still great fun, with some of the most original characters on TV — let's hope Season 6 gets a little surer footing. Grade for season: B

...Meanwhile, I've been studiously attempting to avoid any and all spoilers for "X-Men: The Last Stand." Hope to see it soon and look for a review this weekend!
Posted by Nik at 2:34 AM