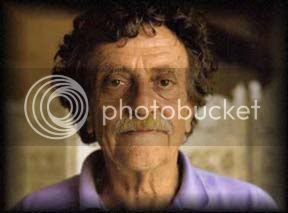 I've always had a bit of an affinity for Kurt Vonnegut. We share the same birthday – Nov. 11. But we also share a kind of bemused black humor about the chaos and craziness to be found in the world around us. Of course, Vonnegut is about three thousand times the writer I am, but y'know, we try to find common ground. Did I mention we have the same birthday?

Vonnegut is nearing his 84th year, while I'm just closing in on 35, though, so he's seen and done far more than I have. His latest, possibly his last, book is "A Man Without A Country," a brief, bittersweet collection of essays that serve a bit as memoir, a bit as a screed against what Vonnegut calls the "proud, grinning, jut-jawed pitiless war-lovers" that have taken over America. If a man who lived through the Dresden firebombing (135,000 died) of World War II, the Great Depression, and more, considers this the worst of times, what hope is there? Yet it's not all cynical curmudgeon grumblings, even if Bush is compared to Hitler at one point. There's still his trademark black humor, and a solid sense of outrage at what Vonnegut sees as us losing the chance to "become the humane and reasonable America so many members of my generation used to dream of." (Most of the material in "A Man Without A Country" was written for "In These Times" and can be seen here on their own Web site.)

"A Man Without A Country," and its pointed political views, is kind of like sitting next to Vonnegut at a dinner party. He holds forth, eloquently and in his unmistakable style, on everything from writing (never use semicolons) to politics to the sorry state of the environment to a common theme of his in his books – loneliness and the utopia of an extended family. "Country" is filled with Vonnegutian (er, is that a word?) humanist insights, such as "Life is no way to treat an animal."

In his autumn, Vonnegut still seems timely. He's never taken himself too seriously, to his credit, and "A Man Without A Country" is a humble, yet opinionated work. "If I die — God forbid," he writes, "I would like to go to heaven to ask somebody in charge up there, 'Hey, what was the good news and what was the bad news?'"

It's fragmented, outraged, pessimistic and a little overwrought, but yet, it's still compelling reading, if not essential. Vonnegut's fiction such as "Slaughterhouse 5" or "Hocus Pocus" remains the place to start for novices – but "Country" serves as a summing up of this unique voice's views, a fine final epilogue. I only hope things aren't really quite as bad as he thinks they are.
Posted by Nik at 3:28 AM