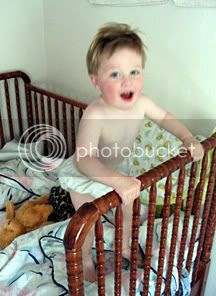 ...So I've been in the throes of a slightly mild freakout, if that's the right word for it, these last few weeks since we returned from New Zealand, and as we get ready to move there for good in just (urk!) six months' time or so. There's a sense of disconnect being back here in Oregon. I feel antsy, like Peter bouncing in his crib. It's not that I'm not looking forward to the Great Migration – but the enormity of it all is inching beastlike into my brain and it's simply hard to relax sometimes. There is much involved with packing up everything you own and either selling it, storing it or moving to the other side of the world with it somehow. From the purely physical to the emotional to the "spiritual" for lack of a better term, the doubts and worries flutter in some days.

It all feels oddly like the last few months of high school, or my final semester in college – the sense you're ABOUT to do something grand and complicated and exhausting, but it's not quite time to do it yet. You spend about half the time being freaked out about the future and the other half nostalgic for a past you haven't left yet.

I will miss the idea of being able to drive five days and still being in America (even if I don't exactly do that every day), petting my cat (anybody want a cat?), seeing my parents and brother more than every couple years, mowing our lawn, reading The Oregonian A&E section on Fridays, cheap bookstores and comics and music, and about a zillion other things. NZ is wonderful but I may feel claustrophobic sometimes, I fear.

Good thing is there's lots of others doing this. Curiously enough, some friends of ours who live in a town just up the road are also moving to NZ this fall – they're like our mirror image, Amy's a Kiwi, husband Brian is American, and their three kids, and they're finally doing this big adventure themselves in September. They've kindly offered us to poach a bit of space in their shipping container as they've got a lot more than we do to get over there. Hard to imagine there's two families in the same county having the same story right now! Or take this family, who went over from Seattle to NZ with Small Family in Six Suitcases as the title of their blog says. Amazing! And we thought we were minimalists!

There's plenty of angst and drama ahead in the coming six months, I know... We'll deal with it, and there's far worse fates than moving to New Zealand. I've always been of two minds; part of me loves the traveling and changing jobs every few years and having lived in Oregon and Nevada and Mississippi and California and New York and so forth, and part of me is perfectly happy to sit in my comfortable chair with my comfortable cat and comfortable books and the view of the hills and trees outside our living room, rather than plunge into unknown territory again... But then again, you don't get the stories without doing the adventures, do you?

But hey! Friday is my second blog-iversary! Yes, two entire years of blathering without end. Return here for pithy insight and valuable prizes tomorrow!
Posted by Nik at 1:16 PM

Email ThisBlogThis!Share to TwitterShare to FacebookShare to Pinterest
Labels: immigration