Happy Blog-iversary to Me 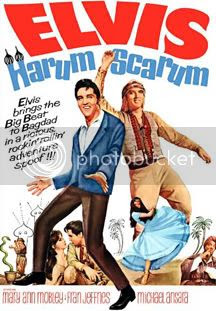 That's right – party down with Elvis (in Baghdad no less), it's my blog-iversary! It's been a whopping 2 years since I finally decided to take the plunge and start the blog thing, and to my surprise, I'm still here. I've written 585 posts since my gloriously inept first post April 7, 2004... not every day, but at least a few times a week. It's been fun, and I hope the handful of you that like reading it have dug it. And to the dozens of viewers a week looking for Nicole Kidman pictures and "Dawn of the Dead" stills, my most popular Google searches, I salute you. (Oddly, nobody ever looks for "Nicole Kidman as a zombie" photos.)

Like most bloggers, I think, I didn't quite know what I was going to do when I started this egocentric pastime... Personal journal? random media rants and raves? comics reviews? cute photos? All of the above, it turns out, plus thanks to the good folks at BlogCritics, I found a venue to spread some of my more polished (well, somewhat) writing to even bigger audiences. I've surprised myself by how much I've written, actually – I wasn't sure what I'd do, since my day job also involves words and the media. But the blog has actually helped me produce writing for work, such as my movie reviews and music reviews. See, blogging helps your job! I don't know how much longer I'll keep this up -- until it feels like hard work, I guess -- but hopefully will continue on as we get ready to move to New Zealand this fall.

So to celebrate the day, I've got a challenge for you, the reader. I don't really do this for the kudos; I've been writing since I was knee-high to an ant, and this is just one of the outlets I use to fend off Demon Boredom, but it is nice to get the feedback. Those of you who make regular comments are the icing on the cupcake of my blog, so to you reg'lars and any of those "lurkers" out there who read but never comment, here's your chance to blog me — feel free to leave a comment right down below and lurk no more!

And, for incentive, I will randomly pick a couple of winners from anyone who comments below to receive incredibly cool prizes, such as a CD of My Favorite Songs I've Heard In 2006 So Far and.. um... other stuff. So comment away, and thanks again for reading.
Posted by Nik at 7:01 PM