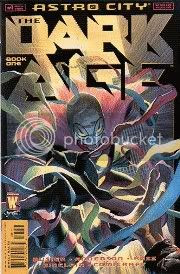 Astro City: The Dark Age #1
I think I'm heading back to "Astro City," Kurt Busiek's acclaimed "realistic" superhero comics, which take a more humane view of standard spandex-clad adventures. Most often, Busiek's writing from the viewpoints of ordinary citizens of Astro City - what's it like to live in a world full of superheroes? Busiek's done some fantastic stories over the years set in Astro City, but illness on his part slowed the production way down and I just kind of drifted away to other comics. Now, he's back with an ambitious 16-part (!) series that's set in the 1970s, at a pivotal time when the candy-colored lighthearted heroics of the old days started to give way to something grim and gritty. This first issue spotlights two brothers - one a cop, one an aspiring thief - and their vantage point as society grows less and less trusting of its heroes. It's all set at the height of Vietnam and Nixonian paranoia, and a quite satisfying read. Busiek's always at his best on "Astro City," with rich characters and fine Neal Adams-esque art by Brent Anderson. This one's no exception so far - it's "adult" superhero comics; not in terms of gore or nudity, but in the mature themes and perspectives it explores. A better value than many of today's ultra-slow storylines, this first issue does the job of setting up relationships and making you care what happens next. A few of the transitions were a bit hard to follow, but otherwise, very good stuff. Grade: A-

Catwoman #44
I have never bought a "Catwoman" comic in my life, but this is my boy Will Pfeifer's first issue as writer, so I decided to check it out. Strong and accessible superheroine hi-jinks, with superb detailed and well-colored art by Pete Woods. Here, Catwoman crosses paths with several villains as she gets involved in a mysterious weapons heist. Pfeifer does a nice job playing up Catwoman as a morally meandering anti-hero, but takes a lighter tone than some of the grittier crime stories I've heard about. His usual snappy dialogue combines with an interesting unfolding plot. Like most "first issues," it's mostly set-up and tease for what's ahead, but holds promise. Grade: B

Spider-Man: House of M #1
I'm not reading the House of M miniseries, Marvel's latest "this will change comics FOREVER!!!!!" cash-grab, so why pick up one of the spinoffs? Well, I'm a Spider-Man fan and have a weakness for "alternative universe" tales of the web-slinger, which this is - plus, Mark Waid's usually a pretty solid writer. This is set in House of M's alternative earth where mutants are the majority and humans the opppressed minority. So what's Spider-Man's place in this? Turns out, he's a famous hero, with a hot wife, a kid and worldwide fame - he even has hired former boss J. Jonah Jameson as a flunkie. It's interesting to see a Peter Parker who's not a loser in life; I like how Waid doesn't just make him a spoiled jerk, but he definitely plants some unpleasant personality characteristics in Parker. The stage is set in the first issue for Peter's perfect world to come crashing down. As alternate histories go, this is better than most issues of "What If?" starring Spider-Man, with nice in-jokes for the fanboys, and has great art. Extra points for this being clearly accessible without reading anything else in the crossover. A good skewed view of Spider-Man all on its own, worth picking up. Grade: B+
Posted by Nik at 8:55 AM