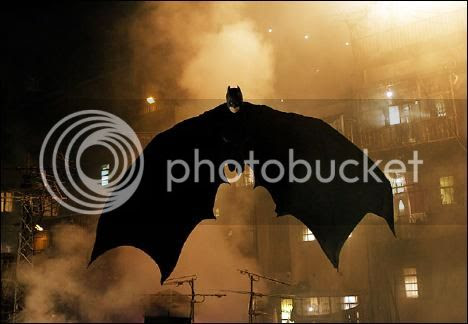 Now that's Batman done right. Just saw "Batman Begins" last night, and thoroughly dug it. Is it the second coming of superhero flicks? Well, no, but it is a well-executed, thoughtful and very elegant exploration of the Batman character, giving us by far the most rounded Batman movie yet. I've got to work on a full review of it for the paper, but here's a few miscellaneous impressions --

• Christian Bale definitely gave us the most spot-on Batman yet, combining all that worked from the last three Batmans -- Keaton's thoughtfulness, Kilmer's gravity and Clooney's, um... chin? I thought Bale did a fine job showing Bruce Wayne's metamorphosis, duel identities and the stern power of Batman (OK, he overplayed the SUPERDEEPVOICE a few times, but it worked for me). From the moment his casting was announced, I thought Bale would be a good fit as the Caped Crusader, and I wasn't disappointed.
• Cillian Murphy ("28 Days Later") was creepy perfection as The Scarecrow, a fear-obsessed psychiatrist with a bag full of nasty hallucinogenic drugs.
• The fun-house Bizarro Gotham of the Tim Burton/Schumacher films was cool on first blush, but got really played out over time. So it was refreshing to see a fairly realistic Gotham City, done by filming in Chicago. The movie benefits by having a gritty Gotham and Batman as the oddest thing in it, rather than just another freak in the freakshow.
• Director Christopher Nolan has a fine eye for combining character with action - his "Insomnia" and "Memento" were stylish little gems. Now that he's got the big canvas to play on, I thought he did a great job. Actually, part of me favors the opening hour of the movie, which is basically "Bruce Wayne Begins," over the more traditional second half. Nolan really brought Bruce Wayne to life, making him much realer to me than any of the other Bat-films have.
• Liam Neeson was Jedi perfection as Wayne's mentor, and I really liked the added twists added to his character.
• Tabloid queen Katie Holmes was quite decent as the new-for-the-movie Rachel Dawes, a character that added solid resonance to Bruce Wayne's decisions as he chose what path to take. She was a little one-note, but then again her character was kind of meant as a virtuous angel, so that worked.
• Also dug Gary Oldman as a spot-on not-quite-Commissioner Gordon, and loved the active role he took in the finale. Oldman's ability to disappear into a character always amazes me (I mean, this guy's played Sid Vicious, Dracula, Beethoven, Lee Harvey Oswald and a lisping Texas-style warlord in "The Fifth Element" -- now that's range!).
• Oddly, one of the most famous actors in the cast didn't quite work for me as well -- Michael Caine's Cockney "Alfie" was a solid role model for Wayne, but he felt too different from the comic book version for me to quite appreciate, and often his character just served as comic relief.
• The jitterbug editing style was a little offputting, especially during a few of the fight scenes, which would've been a lot more impressive with clearer choreography.

Overall, I'd give the movie a strong A-, which might even rise to an A upon repeated viewings. I remember well waiting in line on opening day of 1989's "Batman", sixteen (yipes) years ago now. Prior to "Batman Begins," this was probably the best Batman movie we had, although it's dated terribly in a lot of ways. Keaton, despite not looking the part AT ALL, did a good job, and the production design was certainly impressive. But that godawful Prince soundtrack takes at least ten points off my rating, and the fact Batman can't turn his head is kind of weird. I don't think this new flick will be quite the pop culture monolith or box office hit that one was -- for one thing, a live-action Batman was a real novelty in 1989, and another, this movie is definitely not "kid friendly."

It's funny, all those who say this flick is the "real" Batman at last, though, kind of overlook that like any iconic character, Bats has had countless "realities" over the years - from the 1930s gun-toting 'Dark Knight' to today's ultra-hardass Bat-battleaxe to Neal Adams' shadows-drenched 1970s warrior. And then there's this guy: 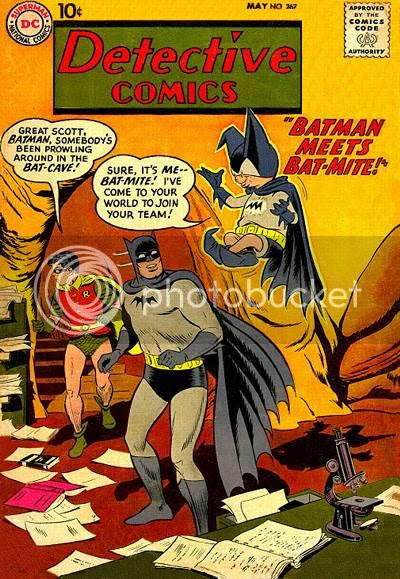 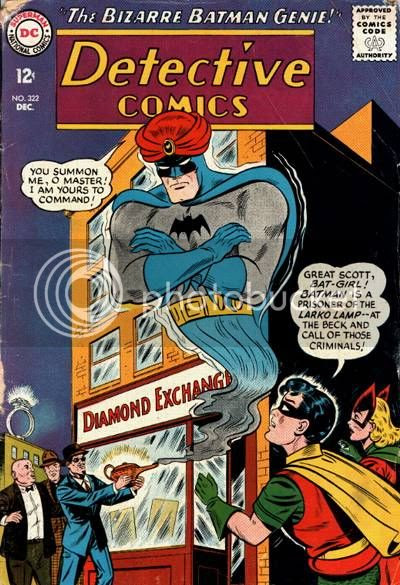 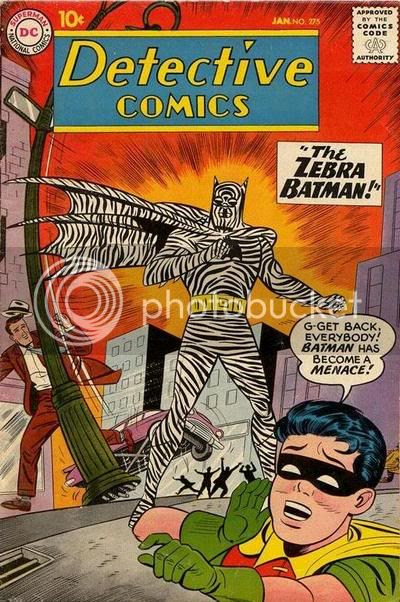 Courtesy of the groovy Great Comic Book Database! The 1960s comics ruled!
Point being, they're ALL Batmans - in my mind, none has any more "legitimacy" than the other. It's all fiction, after all.
Posted by Nik at 4:24 AM