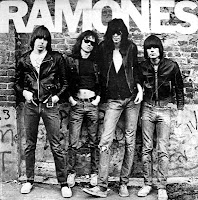 Ten reasons Johnny Ramone rocked. I really didn't get into the Ramones until six or seven years ago, late as usual to most things. But their rapidfire comic-book punk rock has an energy and style that refuses to date, 30 years on. They were always more of a "singles" band than an album band, so picking up something like one of their best-of collections will do you. But unlike most bands, when you get a Ramones "best of," I think pretty much every song you get is a winner.

Sorry about not posting much this week, but work's been a maelstrom of craziness. Hopefully I'll get back in the swing soon.
Posted by Nik at 3:37 AM