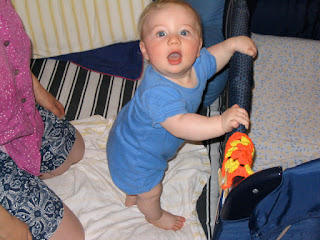 This is Peter Nicholas' latest trick. He's not really able to do it alone, hence the supervision from Mom, but it's still a nice little milestone for a 6.5-month-old. Peter has been all about the walking since Day 1, nearly, and we're starting to think he might just skip crawling entirely. His nickname is "Thumper" as he likes to work his little legs out by repeatedly whacking them against whatever surface is nearby, causing little "thump thump thump" sounds to be heard throughout the house. This weekend we're finally getting off our keisters and doing some much-needed babyproofing, as it's only a matter of time now before the rolling and thumping becomes skittering and crashing. Wheee!
Posted by Nik at 10:46 AM