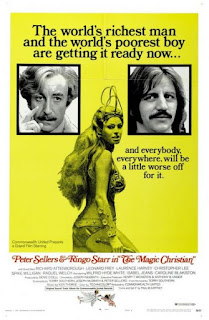 The story: Eccentric gazillionaire Guy Grand (Sellers) has apparently gone off his rocker. He adopts a homeless hippie (Ringo Starr) and embarks on a series of increasingly surreal practical jokes aimed to show the lengths people will go to for money -- humiliating themselves in various ways to get a handful of Guy's vast fortune.

Who's Sellers: Guy Grand. With his floppy hair, tweedy mustache, sad eyes and false good humor, Sellers does what he can with a horribly weak script to give the character life and motivation. I kind of saw Sellers playing him as a man who's done everything, who's been a debauched scoundrel, and who's now just going for sheer crazy kicks. Basically, though, he's a shit-stirrer, doing things like buying a vastly expensive painting to destroy it in front of a snooty art dealer, or filling a vat with urine, feces and money and seeing who'll dive in for the cash.

So how is it: How much more 1969 could this movie be? None more 1969. This is one of those Sellers movies that has a pretty bad reputation on a lot of fronts, but y'know, once I got into its anarchistic spirit, I kinda dug it. There's next to no character development and the plot just kind of lurches from skit to skit -- who is Guy Grand and why has he gone off his rocker? Why does "Junior" just blindly follow along with him? But there's a verve and lunacy to it all that makes it fun to watch, which a lot of other similarly "madcap" '60s flicks never quite managed. Ringo is, well, being Ringo basically, but his deadpan I'll-go-along-with-anything cheer plays well off Sellers. Great soundtrack, too, with Badfinger and Thunderclap Newman galore. It takes a while to really take off, but by the time Christopher Lee pops up on a cruise ship in a Dracula suit, you kind of just go with the flow.

While it's a sloppy, freewheeling and highly blatant piece of hippie kitsch satire, there's a bit of fun if you're in the right mood to be had in watching Sellers & Starr so eagerly puncture the hypocrisies of the uptight squares of 1969 London. With tighter direction and more emphasis on actual characterization it could've been a protest era classic, but as it is it's nowhere near as bad or lazy as some of Sellers' other misfires from this era. The biggest problem is that, like a lot of 1960s idealism, it offers a lot of attacks on a system but little in the way of solutions. Some other reviews point to this film as a forgotten link between the "Goon Show" comedy era of Sellers' early career to the world of Monty Python in the 1970s. (Pythons Graham Chapman and an amusing, already-officious young John Cleese appear in cameos here too to extend the connection. There's a ton of other cameos including Raquel Welch, Roman Polanski and Yul Brynner. Reportedly John Lennon even pops up but I didn't see him.) It's a failure as a "message movie," but "The Magic Christian" is still entertaining.