100 Years of The Daily Mississippian 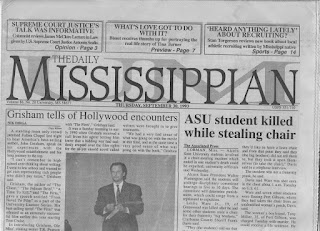 An old boss of mine turned 100 years old this past weekend -- The Daily Mississippian, my college newspaper and the first place I earned my journalism "stripes," so to speak. Being on the other side of the world and all I couldn't exactly make the centennial events (but hopefully a drink or two was had on City Grocery's balcony on my behalf). But more than 15 years after I finished college, I've still got many a fond memory of the old DM, my training ground for a career that's been changing and shifting ever since. Since 1911, the DM has been the voice of debate and news at the University of Mississippi.

It's stunning to look back at my DM term - roughly 1992-1995 or so - and see how much has changed. The "Internet" was barely a notion then, the idea of computer layout of our pages was a shocking novelty (just a year or so before I came along, the paper was still using an ancient pre-desktop publishing system of pagination). The job I have today -- production editor for a major metropolitan newspaper website -- simply didn't exist then. 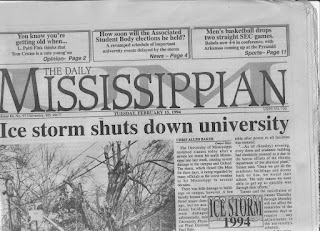 The DM was a terrific place to hang out in college, in the basement of Farley Hall and just across the hall from the hip campus radio station. Putting out a five-day-a-week newspaper felt like being in a club, where a variety of raconteurs, oddballs and iconoclasts were shoved together out of their shared love of the journalism dream. I held a variety of semi-official "titles" there -- opinion page editor, features writer, assistant entertainment editor or something like that, columnist, cartoonist -- and while I didn't live down there 24-7 in the basement like a lot of the staff, I felt the first tinglings of the familiar newsroom buzz that is still an intoxicant to any newshound. We alumni still fondly speak of "The Ice Storm of 1994" which closed down the campus and we scrambled to create an 8-page "EXTRA" edition to cover.

An awful lot of the newspaper's controversy revolved around Ole Miss' evolving place in the post-integration world -- this was a campus which was integrated by the government forcibly in 1962, just 30 years before I arrived, and the wounds were raw -- bullet marks still speckled the administration building columns. When I was there one of the editors was the great Jesse Holland, only the second African-American editor of the paper. I still remember the day some local redneck rang up and got Jesse on the phone and then angrily said, "I wanna speak to the WHITE editor!" Sorry, Mr. Cracker, the times have a-changed and Jesse's since gone on to be the Associated Press's US Supreme Court correspondent. Folks who haven't lived in Mississippi still give it a lot of scorn today, but I tell you, I was there to watch the world ever-so-gradually changing. I'd love to know how that redneck's mind was blown by President Obama.

I learned an awful lot at the DM -- I interviewed California's ex-governor (and once again governor today) Jerry Brown, I met Henry Kissinger, hung out with local writer-made-big John Grisham, and wrote vaguely pretentious newspaper columns about my first loves and the music I was listening to -- the kind of columns every 22-year-old writes and thinks nobody else has ever done. 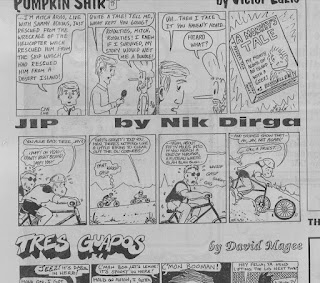 But the biggest charge I ever got at the DM was doing my very own daily newspaper strip for a year or so -- "Jip," a kind of goofy pastiche of Martin Wagner's "Hepcats" with "Bloom County," "Peanuts" and "Doonesbury" that was like flying by the seat of my pants every day as I sat at the drawing board trying to come up with gags and one-liners and characters that seemed at least slightly real to me. It was a real stretch of the creative muscles and an utter blast to do.

These days I work in a "digitally active newsroom" where I do things like live-blog the Royal Wedding, a sentence which would've been half-incomprehensible in 1994. Unlike many of my old pals from the DM, I'm still hanging on in the journalism industry despite its many seismic changes and cutbacks -- and I'm always grateful to the ol' DM for helping get it all started for me. Happy birthday.
Posted by Nik at 1:38 PM