Apparently, "Green Lantern" is the worst thing in the history of ever if you read the message boards. But it isn't actually. It's another fairly routine comic book movie, with a handful of flaws and missteps, but I still found it decent entertainment. Its big problem is it comes amongst a tsunami of comic movies and offers too much of the "same old thing," which "Thor" and "X-Men: First Class" managed to avoid. At this point, I think we comics geeks kind of expect more.

Green Lantern is a step or two down from the Batman and Superman level for DC Comics, but he's been a pretty successful character for going on 70 years now, through a variety of incarnations. The Green Lantern Corps -- a cosmic police force - has spun off into all kinds of configurations, but the best known Green Lantern is Hal Jordan, former test pilot who becomes Earth's first Lantern Corpsman.

"Green Lantern" the movie introduces Jordan (Ryan Reynolds) and his world and goes for a kind of "Star Wars" meets "Iron Man" tone. The faraway world of Oa and the diverse alien corps are wonderfully realized in a million hues of green. Where "Lantern" stumbles is the same place other comic movies like "Iron Man 2" did -- trying to cram in too much. Between the Corps members, Sinestro, villains Parallax and Hector Hammond and Hal Jordan's personal life, there's enough for a couple movies. The film develops a choppy rhythm, rushing to its climax where suddenly novice ring-bearer Jordan becomes an expert warrior.

But still -- I liked Reynolds' breezy, yet insecure Hal Jordan. Jordan is one of those comics characters I've never really warmed to - a generic square-jawed hero who later developed deep problems and even became a mass murderer (as you do). The movie takes the shorthand method of characterizing Jordan (using a heaping helping of traits from another comic Green Lantern, Kyle Rayner). Mark Strong also commands the screen as stern alien leader Sinestro, whose name is a dead giveaway for how the character ends up in the comics. Peter Sarsgaard also makes the most of a rather confusingly written character as the nerdy, betrayed Hector Hammond.

I didn't really think much of co-producer and overrated comics writer Geoff Johns trying to awkwardly cram in many of his own creations like Parallax, a nebulous floating fear demon, or yellow power rings and the like. I'm not a fan of the red, yellow, pink and whatever Lanterns he's created in the comics. The blue Guardians of the Universe are also one of those comic-book concepts that just look a bit goofy on screen. 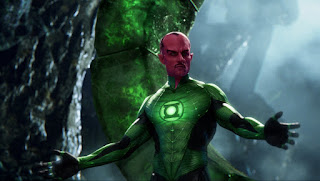 Unlike "Thor" -- where I thought the balance between the fantastical Asgard and the mundane New Mexico actually worked -- "Green Lantern" comes to life best in the outer space sequences. I wanted more of Oa, more of the eye-catching alien Corps, and less of Hal Jordan mooning about over the bland Blake Lively. There's too much that's familiar in "Green Lantern" -- hero discovers powers, hero tested, hero triumphs. For comic movies to succeed when there's so many of them these days they need to set themselves apart, like "Thor" and its Nordic gods or "The Dark Knight" and its epic morality plays.

But y'know, I took Peter, 7, with me to it which is perhaps the best way to see a movie like this, with a boy whose eyes open wide at every sight we grown-ups would call cliche. I mean, Peter even gets a kick out of the much-maligned "Fantastic Four" movies (which "Green Lantern" still surpassed in my humble eye). I know "Green Lantern" isn't a great movie, but I had a great time watching it with Peter. So in that respect, it works pretty well for some ages.
Posted by Nik at 12:58 PM