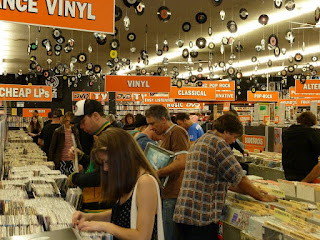 I zipped on down to Auckland's mighty Real Groovy Records for a couple hours today for Record Store Day 2011, celebrated worldwide as a way to help draw attention to the sadly struggling independent record store industry.

It's been a grim year for these kinds of places -- both the other two Real Groovy stores in New Zealand have announced closures (one thanks to the Christchurch earthquake), and I'll do anything I can to keep RG Auckland going strong by grabbing up some more music for the ever-escalating collection. (But honestly, I really needed those Dead Milkmen and Oingo Boingo discs. And that rare Rykodisc Big Star Live album I've been hunting for forever? Score!)

In the last 6 months I've been happy/sad, because I've grabbed dozens of CDs and books from huge clearance sales at Auckland stores -- the Borders chain for instance pretty much got rid of all their CDs so I picked up stacks of bargains back around Christmas. It's awesome for bargain hunting, but kind of grim in the big picture -- these sales offloading stock are because half these places are in receivership or bankruptcy, after all. I don't even know how many of the great book and music stores, corporate and independents alike, will be around in another five years.

Ever since I've been a little kid, one of my favorite pastimes in the world has been shelf browsing. Ask my parents -- when I was 7, my idea of a treat was being taken to the library. And to this day, I get a nice sense of peace and happiness simply browsing the shelves of bookstores and record stores, hunting around for whatever I might happen to find. It's like a treasure hunt, and while sure, I can download that book or record now I might be looking for, I'm just a stickler for the tangible sensation. There's a certain way an old book smells, for instance, which sounds kind of freaky fetishistic to say. I've got a million fond memories of browsing in book and record shops from New York City to San Francisco to Sydney. Real Groovy is one of the greats and a lot of fun to spend time at.

Anyway, Record Store Day is an awesome thing. Take a chance wherever you are today to remember the thrill of browsing the stacks, of finding that rare gem, of supporting these endangered places. I'm all for the digital world, but man, I'll never stop being a fan of musty old second-hand books and previously owned albums.
Posted by Nik at 4:13 PM