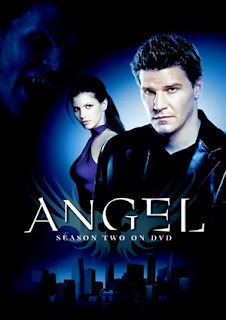 Here we go again, as I slowly continue my bloody plunge through all seven seasons of "Buffy The Vampire Slayer" and now into the five seasons of the spin-off "Angel."

As we enter season 2, Los Angeles' vampire detective Angel and his allies in the fight against darkness battle evil on a variety of fronts -- most notably the resurrected Darla, Angel's former lover and his vampire "maker," a plot line that drives throughout the season.

Season 2, I thought, was a lot more consistent and enjoyable than the sometimes stumbling first season was. We feel that Angel Investigations has become more of a family, and that makes the ups and downs the "team" has this year feel more effective.

It's also good to see the characters grow and change -- Cordelia becomes far more responsible than the conceited teen she was on "Buffy," while Wesley shows new inner strength as he becomes the leader of Angel investigations. A couple of newcomers join the cast too -- former anti-vampire gang leader Gunn and the delightful Andy Hallett as Lorne the Host, who tends to steal pretty much every scene he's in.

I also really enjoy Julia Benz' nasty, scheming take on Darla, a far cry from her sweet and charming wife on "Dexter." Angel's tug of war with Darla continues throughout most of the season, although some of the episodes get a bit repetitive with the whole cat-and-mouse game.

While there's a lot of darkness in this series of "Angel" it's leavened by some goofy humour as well. The season finale series of episodes set in Lorne's home dimension of Pylea are an often-silly treat, kind of "Angel" goes "Army of Darkness.".

Best episode: There's a lot to pick from this season, but "Reunion" takes the Darla/Angel/Wolfram and Hart triangle to a new height, climaxing with the stunning scene where Angel basically lets Darla and fellow vamp Drusilla kill off most of the law firm. It's a good showcase for Angel's dark side (which is talked about a lot, but sometimes doesn't seem very convincing), and takes the story in genuinely surprising new directions.