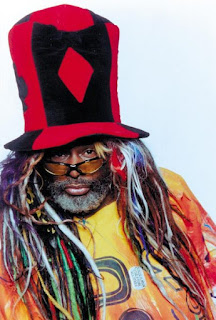 What is P-Funk? It's a style of music, a state of mind, a sprawlingly ridiculous cosmology all shepherded by the fried brain of one George Clinton, who brought his outrageous Parliament Funkadelic gang to Auckland for a show last night at the Powerstation that was a non-stop three-hour celebration of funk, rock and the joy of letting your freak flag fly a bit.

Clinton's tangled musical legacy includes the bands Funkadelic (more rock than funk alone), Parliament (who are a free-wheeling party band) and a whole slew of spin-offs and side projects like funk star Bootsy Collins. I've been a fan of Parliament for a while -- a band guaranteed to cheer you up no matter how low you feel -- while I've only recently delved into Funkadelic's catalogue, an eclectic, beautiful and gritty mishmash of genres and sounds. I wasn't going to miss a chance to see Clinton's mad revue on a rare trip down under.

Admittedly seeing the P-Funk show is more of a nostalgia act today than I'm sure the P-Funk circus was at its peak -- Clinton is nearly 70 now and served more as the "grand conductor" and a genial stage presence rather than really funking out himself; his croaky voice these days sounded a lot more like Captain Beefheart. But the ever-shifting band itself -- by my count nearly 20 people, some old P-Funk hands, some new -- kept a tight hand, with the invaluable rhythm section keeping songs going no matter how far afield they went. Near-naked ladies and men danced and sang, joints were freely passed about, and pretty much everyone on stage took a turn singing a song. A three-hour-plus show bounced and rambled all over the place without a single real break, sometimes the groove only moments from falling apart entirely. The band masterfully tugged and pulled to keep the audience's energy up till well after midnight. 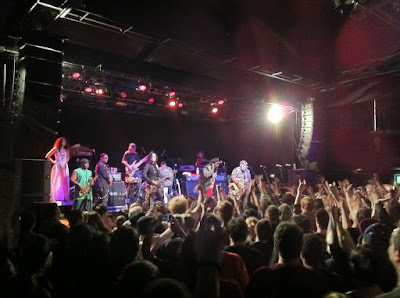 The P-Funk "hits" came out -- "Atomic Dog," "Cosmic Slop," "Bop Gun," "One Nation Under A Groove," a delightful "Give Up The Funk," and blended in with other more obscure Clinton tunes. It's the kind of show where Clinton's granddaughter came on stage in the middle of the jam "Flashlight" to deliver an impromptu risque rap, and it all kind of works.

The best moments were sheer transcendence -- A sprawling 15-minute or so take on "Maggot Brain" really got me. The song in a sense is just one massively anguished guitar solo but Michael Hampton's loving take on it was great. "Maggot Brain" is the kind of song that you either ride along with or find indulgent, but for the space my head was in Saturday night, I found it gorgeous and glittering. Last night's show nicely showed how Clinton's sound can spin from hard-rock crunch to dance-floor anthems at the drop of a hat.

At its best P-Funk is a music of ecstasy, a celebration of being alive for however long we've got. Clinton is one of the few musicians who can be said to have honestly created a genre all his own. Part hard rock, part R&B sway, part pantomime buffoonery and part magic, it's a sound that's well worth seeing live at least once to get the full experience. Now I just need a couple more naps to recover.
Posted by Nik at 5:09 PM