"Our national psyche has been wounded."
"There's a sort of desolate decay and the stench of death."
"The country is in mourning."
"Our darkest hour -- ever." 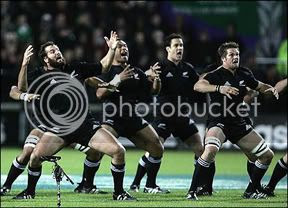 No, nobody died, believe it or not. If you heard the gnashing of teeth and the rending of garments coming from vaguely southwest of the US, it's because New Zealand got stomped right out of the Rugby World Cup Sunday. By France, which just makes it even more humiliating. As I mentioned a few weeks back, rugby is Kind Of A Big Deal Here. It's hubris come to roost because the All Blacks have been pegged as the team to beat, the future champs, best team in the world, etc., but they were ejected in the first quarter-final game. Even though I'm not a real rugby follower, I can say that's a bit of an owch. For a nation of 4 million that apparently puts a great deal of its national identity into the fate of their rugby team, it's a rather stiff kick in the scrum so to speak. It's been interesting to watch all this as a rather uninvested observer -- I cannot even begin to calculate the thousands, perhaps millions of words of World Cup-releated copy generated the past month or so in the papers. Including at least 412 photos of the All Blacks reclining on the beaches and pools of France.

It all seems rather drawn-out to a novice, padded with games against weak teams like Namibia and Japan. The All Blacks rolled over their outmatched opponents in the early games, only to get French-fried in the first real match of consequence. And so the country mourns -- the level of All Black fandom is something an American, with zillions of teams and sports, can't quite imagine. Not everyone is a rugby nut of course, but the ABs certainly unify a nation. Would've been interesting if they'd won. Ah well. There's always 2011 -- when the World Cup is played right here in Auckland, about a mile from my in-laws' house. Egad. Might want to book a holiday for that month.

(And go read my expatriate comrade Arthur's take on the Cup fallout and what it all means down under.) 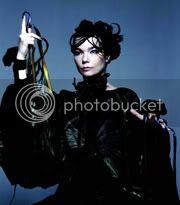 But forget the rugby, I'm all about the music, man. Australia and New Zealand's answer to Lollapalooza is the Big Day Out festival, an all-day concert that draws some of the world's biggest acts. My wife's been many a time but I'm a virgin to it. Until 2008, that is -- they announced this year's line-up last week, and we're definitely going. It's an excellent roster led by Björk, LCD Soundsystem (whose Sound Of Silver is one of my top 5 albums of 2007, easily), Arcade Fire and Billy Bragg. Plus, Rage Against The Machine, who I'm not a huge fan of but hey, I'll see them too, and a bunch of smaller NZ and international acts including Battles, Shihad, Dizzee Rascal and more. I'm particularly excited to see Björk, who puts on quite the theatrical show I've heard. This year's line-up generally seems a little more "adult" than last year's which had a surplus of teenybop emo acts like My Chemical Romance, Jet and The Killers (hence the reason we didn't go to the 2007 gig). It ain't cheap - around $150 a ticket - but actually works out pretty well considering a typical NZ concert ticket for one act runs about $100. And again, Björk, dammit! Can't wait for January 18!
Posted by Nik at 6:33 PM